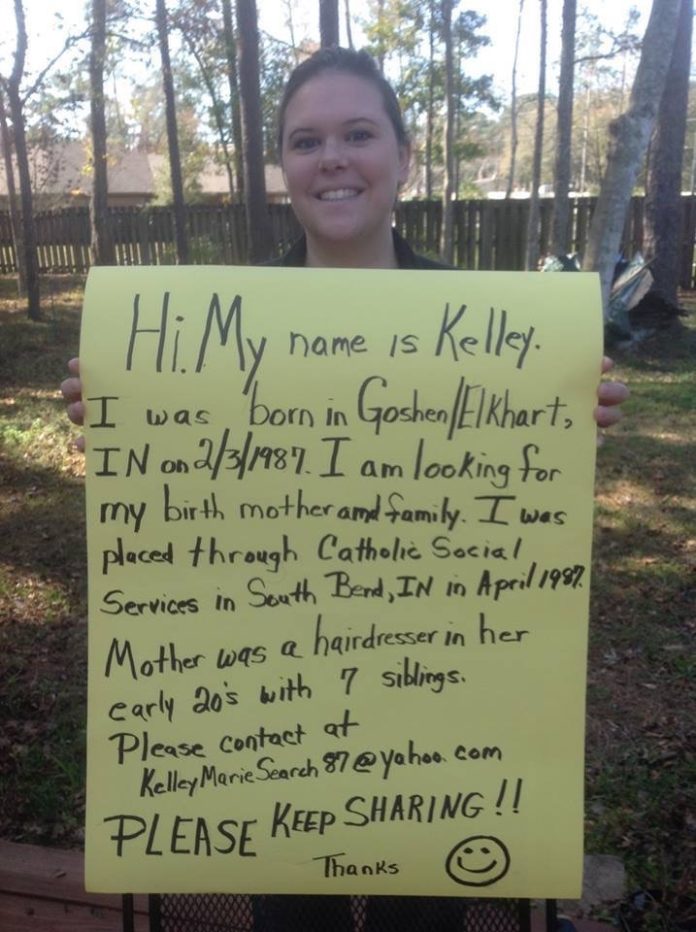 After posting a photo that went viral on Facebook in January in search of her biological mother, Indiana-born woman Kelley Baumgartner is getting the happy ending she has searched for for 28 years.

Baumgartner’s photo had been shared on Facebook more than 200,000 times and, 44 days after she shared it, she got an email at a stoplight, according to 95.3 MNC’s reporting partners, The Elkhart Truth. It was from her biological mother.

In a February interview with The Elkhart Truth, Baumgartner said she only had three clues about her biological mother: she was in her early twenties at the time of Baumgartner’s birth, she was a hairdresser and she had seven siblings.

She had a few other secret clues about her mother’s identity, and said once the woman confirmed those, it was “100 percent validation,” she said.

Baumgartner’s only other hope was to petition the state of Indiana to release her original birth records, she told The Elkhart Truth. State law does not entitle adoptees to access original birth documents or identifying information about biological parents — the subject of debate about Indiana Senate bill 352, which would open up adoption records for some adoptees.

S.B. 352 passed in the state Senate but died in the House of Representatives, as it did not get read in time by the House judiciary committee, according to The Elkhart Truth.

Meanwhile, Baumgartner said she and her adopted mother will not stop advocating for adoptee’s rights. Baumgartner is meeting her biological mother during Mother’s Day weekend — of all weekends — in Jacksonville, she said.

Visit The Elkhart Truth for the whole story and for a breakdown of the legislative background.