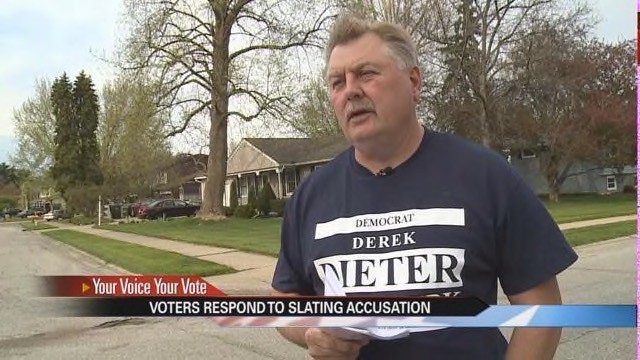 Less than a week before the May 5 primary election, South Bend city clerk candidate Derek Dieter filed a complaint Wednesday, April 29, against his opponent and the incumbent mayor for breaking an Indiana election statute.

Indiana’s anti-slating statute (IC 3-14-1-2) forbids candidates from printing, publishing or distributing “a slate during a primary election campaign” without meeting certain requirements, including having the written consent of all candidates sent to the county election board five days before the materials are sent. The word “slate” is used as a general term in the statute to mean “a sample ballot, reproduction of an official ballot or a listing of candidates.”

The statute wouldn’t apply to TV commercials or yard signs, though it is open to interpretation, Trent Deckard, co-director of the Indiana Election Divison, said in a phone interview Thursday, April 30.

Deckard said it would apply if, for example, there was a flyer sent ahead of a primary election claiming that certain candidates are the official party candidates.

Alex Rosselli, Buttigieg’s campaign manager, told 95.3 MNC’s news partner ABC 57 that the brochures and signs don’t violate Indiana’s slating law — and even if they did, the law was struck down in 2014.

Indeed, U.S. District Court Judge Sarah Evans Barker ruled in November that the state’s anti-slating statute is unenforceable, according to the Indy Star. The judge said candidates can’t be punished for using campaign fliers that are not approved by local election boards.

Dieter told WNDU he believes the campaign brochures published by the Buttigieg campaign that support both Buttigieg and Fowler is a slate as defined by the statute.

Glenn said the complaint was put on the agenda for May 12, the board’s next regularly scheduled meeting.