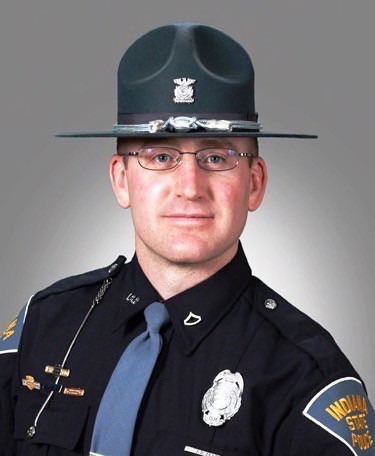 Elkhart County – Indiana State Trooper Jim Zeser recently set down his ticket book and took on a different role in an effort to make the streets a little bit safer for the children of Elkhart County.

As the 2014-15 school year began last September, Zeser noticed a rise in the number of school bus arm violations that he was witnessing and ticketing. More specifically, this was occurring along US 33 in the Dunlap area of Elkhart County. Zeser confirmed his suspicions after meeting with administrators for the Concord Community School system. School officials confirmed that they had received a number of complaints from bus drivers and concerned parents about the unsafe and illegal passing of school buses.

Master Trooper Zeser has lived and patrolled in Elkhart County since being assigned to the Bremen Post out of the academy. Living in and patrolling the area over the past 17 years I have seen many business move in and congestion grow. The schools and houses that are left in the area are caught in a sea of never ending traffic, commented Zeser.

Today Zeser patrols the county in his unmarked state police Mustang as he has for the past seven years. Working in an unmarked police car allows me to blend in with traffic and witness the true driving behavior of the public, said Zeser.

I found the confusion with most drivers was the fact that some of US 33 is divided by a center turn lane. The drivers felt that this meant they didn’t have to stop, which is not true, Zeser commented. Indiana law states that all lanes in both directions most stop for a school bus arm except when the highway is divided by a physical barrier such as a curb or undeveloped median.

Zeser stated that his goal was to make the area as safe as he could the for kids before something tragic happened. I wanted to inform the public of the specifics of the law and end the confusion. “Writing a single ticket for the violation educates one person while setting the signs out can help educate the thousands of people who travel that road every day,” stated Zeser.

Zeser began his pursuit of the informational signs with the Indiana Department of Transportation. After several meetings, exchanging emails and a site study was conducted by INDOT officials and Zeser, the sign placement was granted and put in place in early April. The four signs, two north bound and two south bound are between the US 20 Bypass and CR 15 along US 33. The signs read “All Lanes Stop When School Bus Stops.”

“I commend Zeser for being a thinking professional, identifying the problem and taking the steps outside of traditional law enforcement to help remedy the issue,” stated Bremen Post Commander, Lieutenant Chad Larsh. He continued by saying, “The state police always encourage their officers to think outside the box to solve problems and take ownership in the communities in which they live and patrol.”