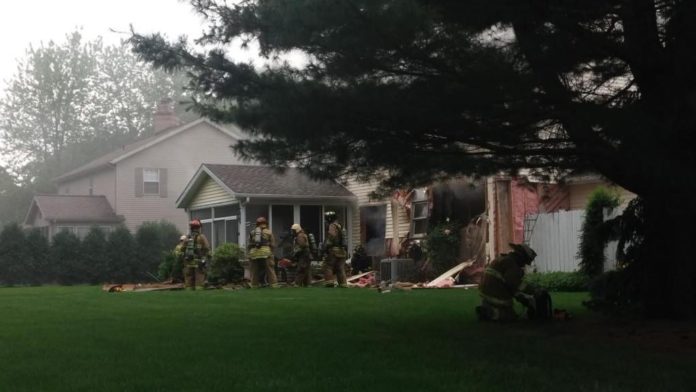 Three residents and one officer were taken to an area hospital after an explosion at a Granger home on Friday.

The explosion damaged all three levels of the house, mostly on the back side, Kilian said. Firefighters pulled siding off the back of the home around a large hole on the main level. Drywall, siding and other materials could be seen strewn across the backyard.

It took about 35 minutes for firefighters to get the fire under control as grey smoke rose into the air. NIPSCO shut off gas to the house, Kilian said. The neighboring houses aren’t in danger and neighbors shouldn’t be concerned.

The house was deemed a “substantial loss,” but may not be a total loss, Kilian said.

Officials are still investigating the cause of the explosion.

Firefighters examine the back of a home after an explosion at 51000 Jodie Lynn Drive, Granger. @ElkhartTruth pic.twitter.com/trvyeFb5WR