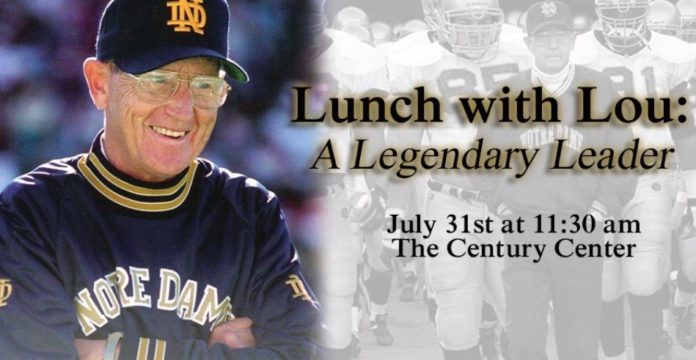 Former Notre Dame Coach Lou Holtz will be in the spotlight during a special event at the end of July in which the proceeds will benefit three area non-profit organizations that focus on mentoring.

Lunch with Lou takes place from 11:30 a.m. to 1 p.m. July 31 at the Century Center in downtown South Bend. Tickets are $60 and sponsorships are available.

Holtz coached at Notre Dame from 1986-1996, leading the Fighting Irish to the 1988 national championship. Many former players call his leadership a major influence on their success beyond the football field.

“Lou Holtz is a legend not only as a football coach, but for his ability to motivate people in all walks of life,” South Bend Mayor Pete Buttigieg said in a news release about the event. “His message of service, persistence and excellence echoes the mission that our local mentoring organizations put into practice everyday to support our children.”