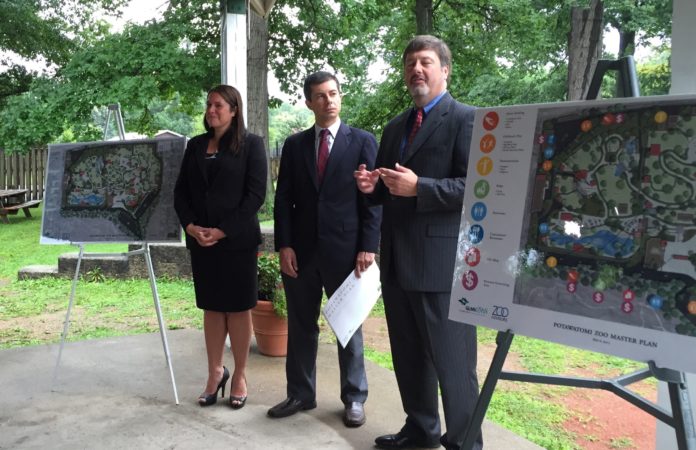 Seeing wild animals up close isn’t an everyday experience in northern Indiana, but soon people will have a chance to zip line over alligators and feed giraffes at the Potawatomi Zoo.

Those are just two features that are part of the $37 million master plan announced by zoo officials during a press conference Thursday, July 9.

Marcy Dean, the zoo’s executive director, said the plan to renovate and add exhibits and animals is a “revitalization” for the zoo, which opened in 1902. She could hardly contain herself while announcing the plans Thursday.

“I’m very excited,” Dean said in an interview. “It just feels really good to be able to publicly debut it and say to the community, ‘here’s what your zoo is going to look like in the next 15 to 20 years.’”

The 2011 addition of the North American river otters and the public-private partnership between the city of South Bend and the Potawatomi Zoological Society that began in January 2014 paved the way for the project.

The next step includes adding a zip line over the alligator pond on the southwest area of the zoo and installing a colorful endangered species carousel near the entrance — both of which may be open as soon as 2016.

The hope is that the smaller, more accessible projects can be completed quickly to build momentum for larger changes, Dean said. Work began on the first phases before the plan was announced Thursday.

The Africa, Asia and North America areas will be redesigned and include more animals, including giraffes, penguins, snow leopards, eagles, wolves, cougars and bears.

The Potawatomi Zoo isn’t acquiring additional land for the expansion. Instead, the zoo will make use of areas of the property that are underdeveloped to create more space for the exhibits.

Other features in the plan include a restaurant, relocated concession areas, expanded corporate picnic areas, more play areas for children and a new administration building.

The master plan includes four phases that outline the order in which each project is planned, but Dean said funding will also play a role in when certain exhibits will be added and redesigned. For example, if a donor passionate about North American animals wants to fund that phase of the project early on, then that phase would take priority.

Donors have helped the zoo add new features in the past, including the otter exhibit and the planned carousel, but that won’t be the only source of funding for the $37 million expansion, George Horn, president of the Potawatomi Zoological Society, said in an interview.

Horn hopes that increased revenue from the new attractions will help fund the projects. The zoo will also seek out grants and money from other private sources.

In addition to expanding exhibits, the zoo will make a concentrated effort on environmental conservation and expanding its breeding program.

“(The zoo’s) breeding program helps sustain some of those very valuable and very limited species in our society,” Horn said, pointing to the recent births of the three rare Amur leopard cubs as an example.

“The Amur leopard is the most endangered big cat in the world and we have three (cubs),” he said. “No other zoo has had a successful birth in the last two years. We are going to have a very real role in contributing to the continued survival of that species, not just in the U.S., but around in the world. That’s just amazing to me that we’re able to do that.”

The master plan includes expanded yards for big cats in the Asia exhibit, which are large specifically with breeding in mind.

In addition to the new animals, there will likely be many new faces around the zoo in the coming year.

Hiring plans aren’t specifically mentioned in the master plan, but Horn said that new employees will be hired as they are needed with each phase of development.

The expansion at the zoo could also result in economic development elsewhere in South Bend as people visit one attraction and decide to check out another.

Dean said attractions like the South Bend Cubs and the Potawatomi Zoo are great at drawing people in to the area. When two organizations partner up, like the Cubs and the zoo are doing for events later this year, everyone wins, including the community.

“I think we can build on each other’s successes,” she said.

South Bend Mayor Pete Buttigieg said he’s excited about the expansion and the potential it brings to the city.

“If you look at the number of people who are coming to the zoo, it’s more than the people who live in (South Bend). So we know that people are coming from all over,” he said. “And when they come, they’re going to fill up a tank of gas around the corner or buy a cup of coffee or maybe decide to check out what else is in South Bend.

”We know that this is not just an educational treasure. It’s an economic engine and it makes our whole city better off.“