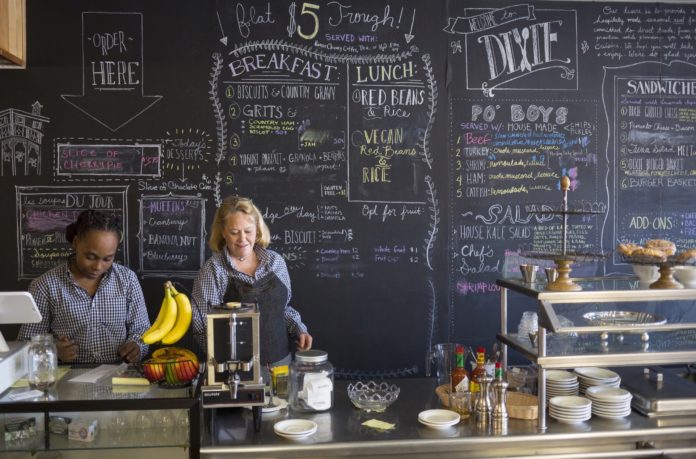 After less than one year of business, Dixie is closed in South Bend.

The restaurant at 808 E. Colfax Ave., opened in February 2015 and specialized in traditional Southern food as a nod to chef and co-owner Aislin Keith’s New Orleans roots.

In the last few weeks of summer, Keith decided to shutter the restaurant as she faces two surgeries and treatments, Heidi Prescott with the South Bend Tribune reports. Keith’s leukemia is no longer in remission.

The building isn’t for sale yet, though. Keith is hoping another restauranteur will set up a lease agreement with her, or the space could be used for food truck owners.

Get more details in the full story on Flavor 574.

An annual nine-day restaurant event is returning Oct. 30 through Nov. 7 in Elkhart.

During Elkhart Dining Days, participating restaurants will offer specials on certain meals. Ten percent of the proceeds from those purchases will benefit Church Community Services in Elkhart, Flavor 574 reports.

Get updates about the event and find more information at elkhartdiningdays.flavor574.com.

For more information, see the whole story on Flavor 574.

The upcoming cocktail bar announced on social media Thursday, Sept. 3, its location at 111 E. Lincoln Ave. Co-owner Ryan Hawkins hopes the space will open by the end of the year — sometime by mid-December.

Ryan and Jami Hawkins are still figuring out some of the offerings, but hope to have about eight beers on tap and roughly six signature cocktails. And you won’t find pre-made mixers and syrups in house.

You’re never too old for a pizza party.

In the spirit of National Cheese Pizza Day on Saturday, Sept. 5, Flavor 574 asked staff to taste test slices from Papa John’s, Pizza Hut and Little Caesars to decide which one they liked the best.

Let us know your favorite in the comments below!

For more updates, recipes and news from the Michiana food scene, subscribe to newsletters from Flavor 574.