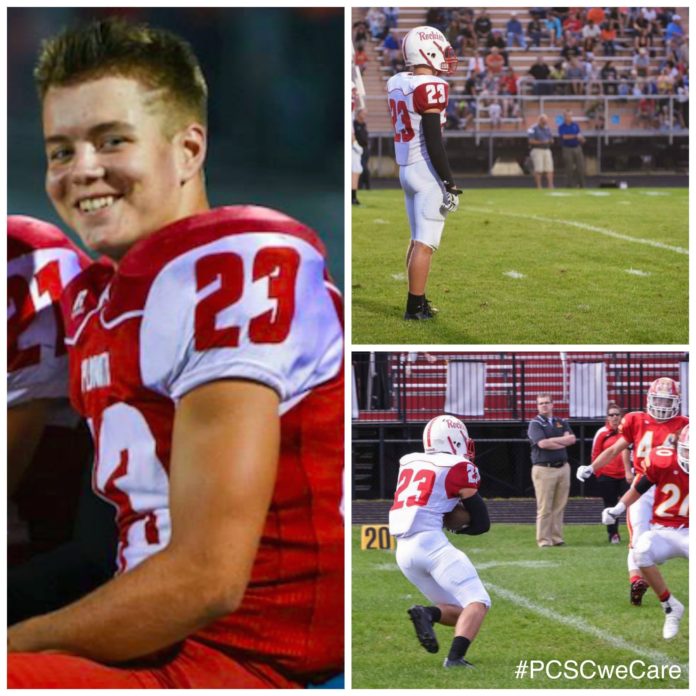 The Plymouth community is mourning the loss of a Plymouth High School student and football player who took his own life Sunday, Sept. 20.

David Bacon, a junior, was loved by his teammates, classmates, teachers, family and friends, Plymouth Community Schools Superintendent Dan Tyree said at a news conference Monday afternoon, Sept. 21. He attended the Weidner School of Inquiry at PHS and also played basketball his freshman year and baseball is freshman and sophomore year.

Bacon’s jersey number — 23 — was painted on the Plymouth High School football field on Monday in memoriam.

Bacon’s father is Dave Bacon, the chief of the Plymouth Police Department. His two younger siblings are students at Lincoln Junior High School.

Counselors and clergy members are available for students at both Plymouth High School and Lincoln Junior High School for any students that need them.

Funeral arrangements have not been set. Depending on the arrangements, some school events may be cancelled later this week.

We lost an important member of the Rockie Family. Please keep the family of David Bacon #23 n your thoughts & prayers pic.twitter.com/b4KAZLxoMn

Our thoughts & prayers are with David Bacon’s Family, football team and his friends at this tragic time. #PCSCweCARE pic.twitter.com/fyxysJc6mZ

Teenage suicide is the third leading cause of death for young people, according to the National Alliance on Mental Illness. September is known as National Suicide Prevention Awareness Month, when NAMI encourages people to talk about suicide and mental illness and share resources that provide help to people who may have suicidal thoughts.