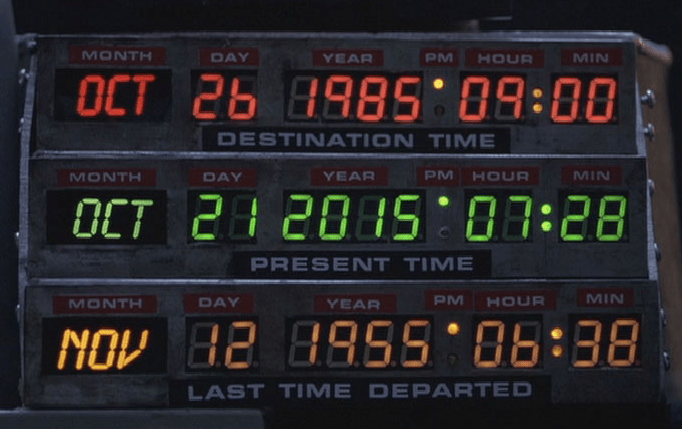 The future is here — or at least the future according to Back to the Future Part II.

Wednesday, Oct. 21, 2015, is the date that Marty McFly, Emmett “Doc Brown” and Jennifer Parker traveled to in the 1989 installment of the Back to the Future trilogy.

Back to the Future celebrations are planned around the country. Locally, the AMC Showplace 16 movie theater will play all three sci-fi flicks beginning Wednesday afternoon. Tickets are $3.99 per movie.

The future envisioned in the film is pretty different from the actual 2015 — namely that there aren’t hover boards, flying cars, clothes that shrink to fit (unless you count the T-shirt you shrunk in the dryer last week) or self-tying shoelaces.

But that doesn’t mean every prediction was wrong. For example, video calls are prevalent in both the real 2015 and the Back to the Future 2015, even if they are used differently.

One particular prediction could still come true for 2015, even if it doesn’t make the Oct. 21 deadline. The Chicago Cubs won the World Series in Back to the Future Part II.

In the real world, the Cubs will play the New York Mets on Wednesday night with the hope that they will win the game and the next three to become the National League champions.