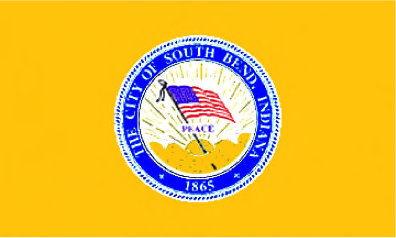 Three finalists have been chosen in the search for a new flag for the city of South Bend.

More than 200 designs were submitted for the competition and the South Bend 150 committee chose their favorites, according to Kara Kelly, director of communications for the mayor’s office.

Residents can vote once online for their favorite design. Voters must provide a valid email address. Voting is open until 5 p.m. Friday, Jan. 8. Cast your vote.

Here’s a description of each design:

Flag 1 was designed by Jeffrey Koenig, a South Bend resident and freelance designer who works with CreativeDesign in South Bend. The design was inspired by a lapel pin created when Joe Kernan was mayor. The six-sided star represents South Bend’s six council districts and the five stars represent the city’s five eras as identified in South Bend 150 literature. The blue “S” represents the St. Joseph River and the city.

Flag 2 was designed by Jesse Villagrana, who was born in South Bend and attends IU South Bend. The flag has a navy chevron or arrow, which represents the St. Joseph River and the city’s connectivity to the rest of the country. The six-pointed star represents South Bend’s ethnically diverse population while the yellow represents innovation — different people working on various things that come together in unexpected ways and bring new ideas to South Bend.

Flag 3 was designed by Garrett Gingerich, a South Bend resident and director of eMedia at Pathfinders Advertising & Marketing Group Inc. in Mishawaka. The flag includes a red star the represents the city, the passion, energy and determination that can be felt in the community. The star’s six points reflects the city’s six council districts. The white area represents the city’s diverse cultural and religious influences, while the left blue band represents the St. Joseph River, which broast Native Americans and settlers to the area, and is in the shape of an “s” in reference to the city’s name. The white stripe symbolizes peace and echoes the South Bend city seal. The blue area to the right represents stability, confidence and innovation, characteristics reflective of South Bend’s pioneering spirit.