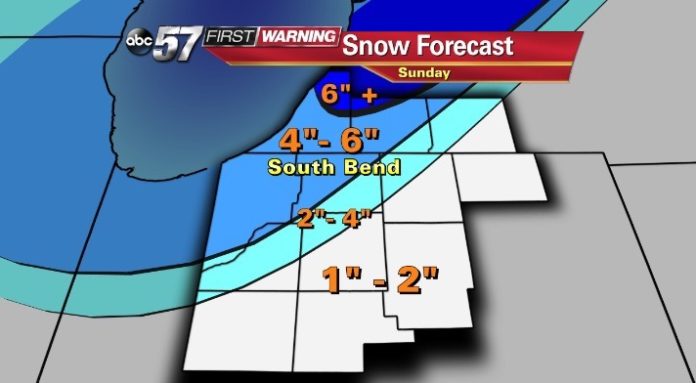 The National Weather Service has issued a Winter Weather Advisory for the some counties in the 95.3 MNC listening area, including St. Joseph and LaPorte counties in Indiana. In Michigan, the counties include Berrien and Cass.

Rain will change over to snow with periods of snow expected overnight into Sunday.

Total snowfall accumulations of 2 to 5 inches are expected through Sunday afternoon.

Northwest winds will increase to 15 to 25 mph with gusts to 30 mph at times. Winds will remain strong on Sunday. the snow will initially be wet and heavy overnight. Blowing and drifting will likely begin later tonight and continue Sunday.

Temperatures will fall below freezing with wind chills dropping into the teens. Wet and snow covered roads will quickly freeze.

Power outages are possible due to the combination of heavy snow and strong winds.

After Sunday, waves of cold air will enter the area from the northwest along with the chance for lake effect snow, which could add another 1-2 inches of accumulation.

The forecast details are below: