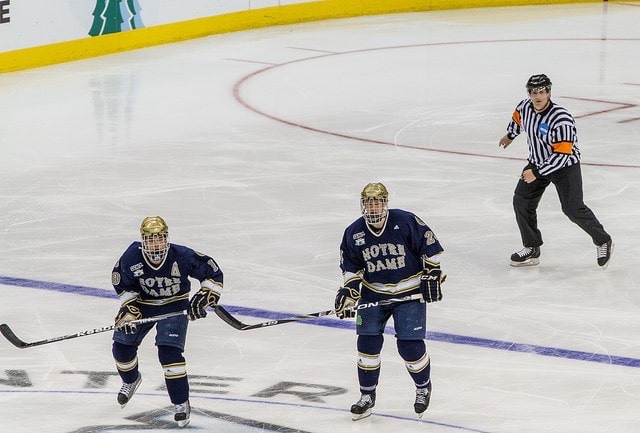 CINCINNATI (AP) — Tyler Motte took a pass in front of the goal and scored 8:19 into overtime Friday night, giving Michigan a 3-2 victory over rival Notre Dame in an NCAA Tournament’s Midwest Regional semifinal.

The long-time rivals have faced each other twice in the NCAA Tournament and both games have gone overtime, with each winning once.

Michigan (25-7-75) will play top-seeded North Dakota on Saturday for a berth in the Frozen Four, a game matching two of college hockey’s record-setting programs. North Dakota beat Northeastern 6-2 in the other semifinal.

Michigan was the top-scoring team in the country, averaging 4.89 goals. The Wolverines pulled one out in a game where goals were hard to come by as Notre Dame (19-11-7) cranked up its defense.

The Wolverines won their first Big Ten Tournament with left wing Kyle Connor — the league’s top freshman and player of the year — leading the way. He couldn’t even get off a shot in the first two periods as Notre Dame turned it into a grind-it-out game.