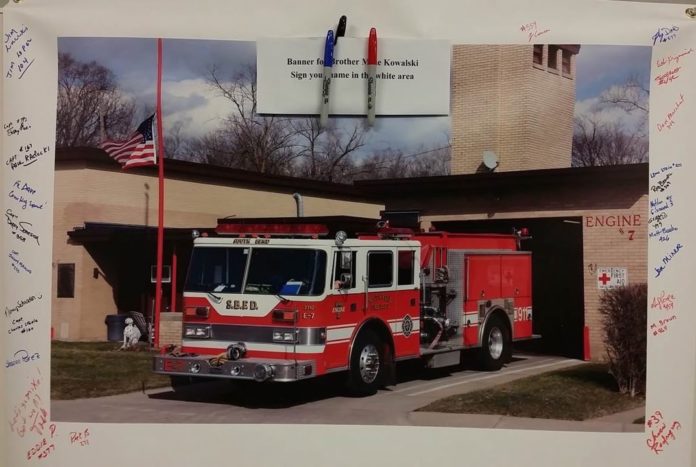 A South Bend firefighter is able to hold his head up and recognize voices 2 ½ months after he was seriously injured in a crash with an allegedly drunk driver.

Mike Kowalski woke up from a medically-induced coma after he was transferred to St. Vincent Hospital in Carmel, Capt. Gerard Ellis with the South Bend Fire Department told 95.3 MNC.

Kowalski can follow voices with eye movement and blink, but his body remains paralyzed. He’s undergoing therapy and living in an assisted living nursing home near his daughter in eastern Indiana, Ellis said.

A GoFundMe site is collecting donations to help with Kowalski’s medical bills. The bills have reached more than $250,000. Donations are also being collected at the Pass-The-Hat fund at the Firefighters Credit Union. About $8,000 was collected by Friday, April 1.

South Bend firefighters are signing a poster that will be taken to Kowalski to hang in his room. Kowalski joined the South Bend Fire Department in 1977.

Kowalski was stopped at a red light at Darden Road and S.R. 933 on Jan. 16 when his vehicle hit from behind by another vehicle, pushing him into traffic and causing a crash. He was off-duty when the crash happened.

The man accused of causing the crash, 41-year-old Oswaldo Mendez, faces up to 2 ½ years in prison after he was charged with operating while intoxicated causing serious bodily injury, a level 6 felony. He is scheduled to go to trial May 24.