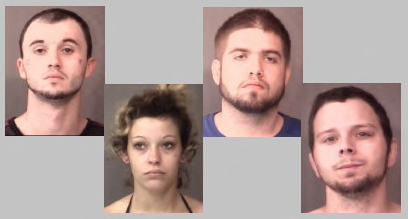 Four people have been arrested in Kosciusko County after a police chase into Leesburg along S.R. 15.

It started when police tried to pull over a vehicle at about 1 a.m. Tuesday, but the vehicle kept going, according to a news release from the Kosciusko County Sheriff’s Department. Eventually the vehicle stopped in the 300 block of Van Buren Street and four people got out and ran from police.

One of the vehicle’s occupants, 24-year-old Brady Lee Shepherd of Leesburg, was arrested on a warrant at about 10 a.m. Tuesday after he had spent the night sleeping in a gravel pit, according to the news release.

About an hour later, two other people who were in the vehicle were found sleeping in a pickup truck parked at a Warsaw police officer’s home.

Bruce Kitson Tillman Jr., 24, and Santana Ann Collingsworth of Warsaw, 20, were arrested on preliminary charges of resisting/fleeing law enforcement and unauthorized entry into a personal vehicle, according to the news release. They are both being held on separate $10,000 bonds at Kosciusko County Jail.

After arresting three suspects, police learned about a fourth suspect, 25-year-old Jordan Schultz. Schultz was later found inside his Warsaw home, according to the news release. Two children, marijuana and methamphetamine were found inside the home.

Schultz was arrested on a warrant and preliminary charges of felony neglect of dependents, possession of methamphetamine and manufacturing methamphetamine. He was also preliminarily charged with domestic battery in front of a minor and strangulation for an incident that occurred at the home the night before, according to the news release. He is being held on $4,000 bond.

The Department of Child Services were called for the two children inside the home.