Michiana’s Morning News features Fox News and top local news stories at the top and bottom of every hour, plus traffic and weather updates every ten minutes on the 6’s. The 5-Day Forecast from the ABC 57 First Warning Neighborhood Weather Center airs at :16 and :46 past each hour. Sports updates air at :48 past each hour. We also feature Fox Business Reports, farm updates from Hoosier Ag Today and the lowest gas prices from www.GasBuddy.com at :27 past each hour. 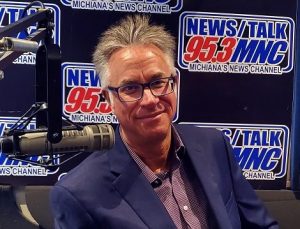 Jon Zimney lives in Granger. He and his wife have a college-age daughter and two dogs. Jon was born and raised in Davenport Iowa. He began his radio career in 1986 while attending St. Ambrose University.

Jon actually worked at the same radio station where President Ronald Reagan began his broadcasting career. From there, he worked at News/Talk radio stations in southern California, Phoenix Arizona and at 1190 WOWO in Fort Wayne.

Jon has been with 95.3 MNC since 2010 as the News and Program Director and enjoys waking up early to get a head start on the day and keep listeners informed about the morning’s news, weather and traffic. For fun, he enjoys working out at the gym, days at the beach, traveling and watching movies. You can follow Jon on Twitter. 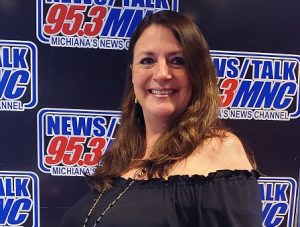 I grew up in Elkhart, Indiana, São Paulo, Brazil and Melbourne, Australia. It made for an interesting and exciting childhood that ultimately landed me in New York for college, where I earned a BFA in Conservatory Theatre. While raising my daughter, Hannah, I discovered my love for and talent with Voice-Overs and Radio. 25 years later, I have never looked back. I have been consistently and happily “On the Air” since my very first gig.

My first decade in radio saw me jockeying music on Smooth Jazz, Oldies, and Adult Contemporary formats in New York and Connecticut. I eventually took a management and Program Director position and performed a daily talk show on SiriusXM.

This past decade in radio, I’ve hosted a series of talk shows on SiriusXM, legendary WABC in New York City, WLS in Chicago, and WGCH in Greenwich,CT. My shows have been interview style, advertorial programs, and even a well-known psychic themed, live call-in show. Talking to and connecting with people and sharing stories is my passion. I love to use my voice to inspire, uplift, and put meaningful and positive content out into the world.

In addition to radio, I am a veteran Voice-Over artist, Writer, Actress, Speaker and Teacher/Professor. Connecting with others, on or off the air, is my greatest joy.