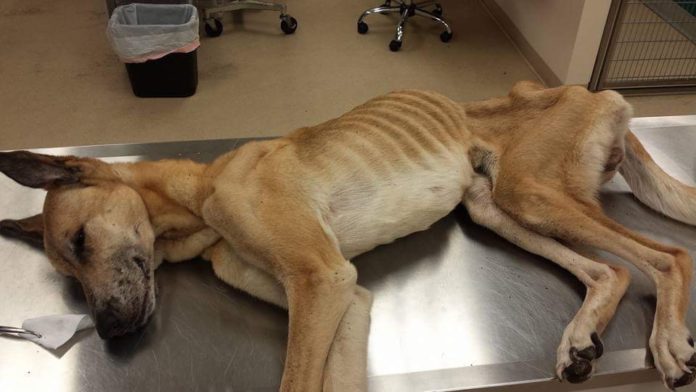 Officers with the St. Joseph County Police Department are investigating a case of possible animal cruelty after a severely malnourished dog was found wandering along a rural road in North Liberty on Tuesday morning, July 28.

The dog, who vets are calling Hope, is being treated at Gilmer Park Animal Clinic, according to Melody Heintzelman, who runs the Facebook group South Bend Lost and Found Pets.

Hope tested positive for heart worms, but the vet staff at Gilmer is focusing on giving Hope nutrients and food so that she can gain weight and become stronger, Heintzelman said. She will be treated for heart worms when she is strong enough.

Hope was found wandering on Madison Road about a mile from Redwood Road in North Liberty, according to a Facebook post from the St. Joseph County Police Department.

Heintzelman has collected donations for the group’s emergency fund at Gilmer, which is being used to pay for Hope’s medical care.

“This is such a sad story and I’m thankful that she was found before it was too late for her,” she said. “The outpouring for her has been great.”

Investigators with the St. Joseph County Police Department are looking for more information about Hope. Anyone with information is asked to contact Cpl. Dave Wagnerowski at 574-235-9569 or dwagnero@co.st-joseph.in.us. Anonymous tips can be given to Michiana Crime Stoppers at 574-288-STOP.

Anyone who wants to donate to the South Bend Lost and Found Pets emergency fund, either specifically for Hope or for general use, can do so by calling Gilmer Park Animal Clinic at 574-291-3302. Donations can also be sent via Paypal to the email address tina2david@yahoo.com. Paypal donations should be marked as a gift from a friend or family member.