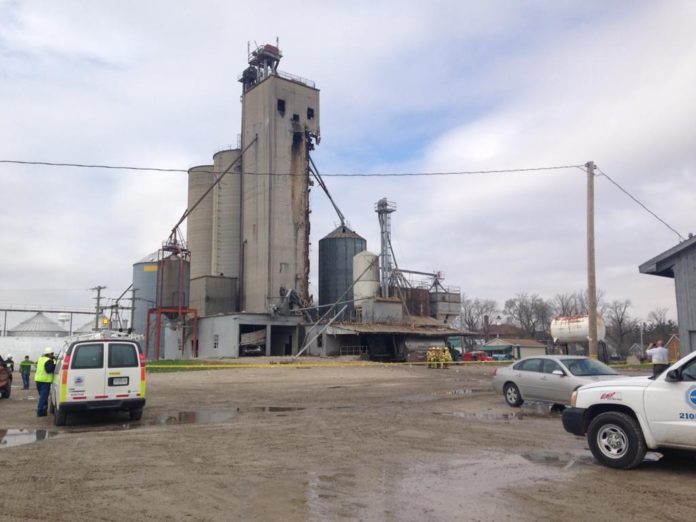 Two other people were taken to Porter Hospital in Valparaiso. None of the injuries were life-threatening, Capt. Michael Kellems with the LaPorte County Sheriff’s Office said in a news release. Most of the injuries involved burns.

The grain elevator where the explosion happened was about 175 feet tall and the damage was extensive, Kellems said. Police are concerned that the structure could collapse, so the surrounding area has been blocked off. Members of the sheriff’s office will provide security overnight.

“Our thoughts and prayers are with the employees who were injured today. We have notified their families and provided them the location of the medical facilities where their loved ones were taken for treatment. Co-Alliance personnel will be on-site at the hospitals to provide support and assistance to the employees and their families,” Kevin A. Still, CEO of Co-Alliance, said in a statement. “We do not yet know the cause of the accident, but will work with the authorities in their investigation.”

The cause of the explosion is still unknown, but police believe it was likely an industrial accident, according to a news release. OSHA, Bureau of Alcohol, Tobacco, Firearms & Explosives and the Indiana State Fire Marshal’s Office are sending representatives to the scene as police continue to investigate.

The explosion was reported just before 10 a.m. EDT in the 400 block of Howard Street in LaCrosse, according to WNDU. Emergency crews arrived at the scene at about 10:10 a.m.

Co-Alliance LLP is an alliance of five co-ops owned by farmers in Indiana, Michigan and Ohio. The LaCrosse location provides “feed mill and swine services,” according to its website.