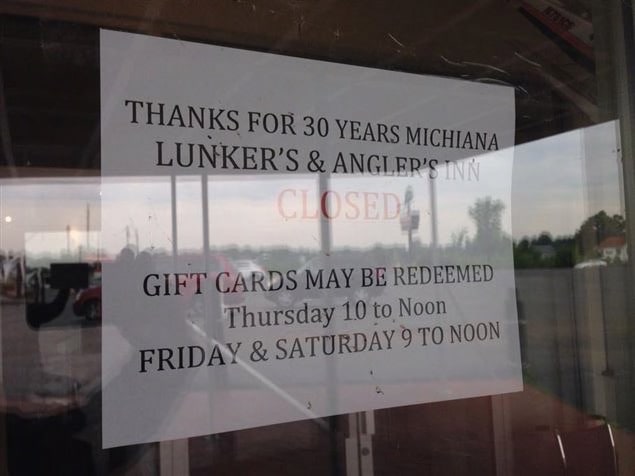 Longtime Edwardsburg restaurant and store, Lunker’s and Angler’s Inn has closed its doors.

It’s a surprise for residents, customers and employees as the sign on the door reads, “Thanks for 30 years, Michiana. Lunkers and Angler’s Inn, Closed.”

Employees reportedly found out about the business closing on Wedneaday, June 10, less than one week after Lunker’s posted a Hot Dog Eating contest on it’s Facebook page which was set for June 15. Some of the employees had worked for the store and restaurant for 15 years and longer.

The closure is due to financial difficulties that began with the recession, according to a news release as reported by 95.3 MNC’s news partners at The Elkhart Truth.

A sign on the door at Lunker’s stated that gift cards to the store can be redeemed from 10 a.m. to noon Thursday or from 9 a.m. to noon Friday and Saturday.

If you’d have told me this was possible 20 years ago Ida laughed at ya…RIP Lunkers http://t.co/ni8KRkgYtu