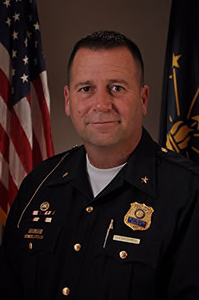 Uniform Division Chief Scott Ruszkowski will be sworn in next month as the new chief of South Bend Police Department.

The announcement comes after current Chief Ron Teachman announced he is resigning from the department to take a job as a director at SST Inc., the parent company of ShotSpotter.

Teachman’s last day will be Sept. 30. Ruszkowski will be sworn in Oct. 1.

“No one is more engaged with this community and respected inside of it (than Ruszkowski),” Teachman said during a news conference Friday. “Nobody in this country is ready to seamlessly transition into the role of chief.”

Ruszkowski is a South Bend native and graduate of the former LaSalle High School who has been with the department since 1989.

He was appointed division chief — the second-highest rank in the department —  by Teachman in 2013. His previous positions with the department include lieutenant and commander of the Street Crimes unit. He also served as president of the Fraternal Order of Police Lodge 36 and on the board of directors of the Indiana FOP Foundation.

He also co-founded the South Bend Police Department’s Critical Incident Team, which prepares for and responds to incidents at the unit level.

Ruszkowski was also appointed to attend the FBI National Academy at the University of Virginia in 2006. He also served as an active duty and reserve petty officer in the U.S. Navy.

“I can assure you my number one priority is and always has been the people outside of this building. Look out of the window and you’ll see,” Ruszkowski said. “My job is to speak for them and speak about them and make sure our officers do the same. There’s a lot of things to work on. There’s a matter of trust. There’s a matter of respect. You can’t have one without the other, but it starts with trust.”