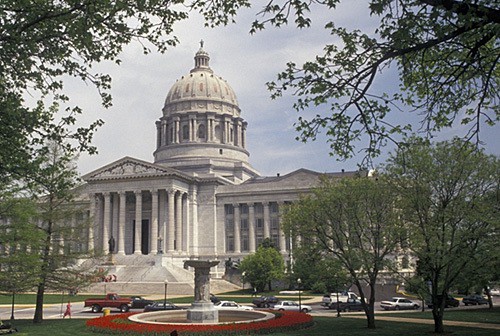 JEFFERSON CITY, Mo. (AP) — The state Senate early Wednesday gave initial approval to a measure to amend the Missouri Constitution to provide further religious protections for those objecting to gay marriage, advancing the proposal after a 37-hour filibuster by Democrats opposed to it. Here are some things to know about the proposal.

WHAT DOES THE PROPOSAL DO?

The proposed amendment to the Missouri Constitution would prohibit government penalties against those who cite “a sincere religious belief” while declining to provide goods or services of “expressional or artistic creation” for same-sex marriage ceremonies or celebrations. The measure cites photographers and florists as examples of those who could be covered.

Businesses would be protected if they deny services for a wedding or a reception that happens around the time of the wedding.

The measure also would shield clergy and worship places that decline to participate in such weddings.

WHY ARE LAWMAKERS DOING THIS?

The measure is in response to the U.S. Supreme Court ruling last June that legalized marriage of same-sex couples in all states and effectively overturned a provision in the Missouri Constitution that limited marriage to one man and one woman.

Republican lawmakers argued that the legalization of gay marriage could lead to attacks on the religious liberties of those opposed to it. Sen. Bob Onder, a Lake St. Louis Republican who sponsored the Missouri measure, cited lawsuits in other states against bakers and florists who denied wedding cakes and flowers for same-sex couples.

Opponents say civil rights of lesbian and gay people are under fire. Senate Democrats, who staged a roughly 37-hour filibuster from Monday afternoon to Wednesday morning in an effort to block a vote, argued it encourages discrimination against same-sex couples.

WHAT ARE THE NEXT STEPS?

Republicans, who control the Missouri Senate, used a rare procedural tactic Wednesday to end the Democratic filibuster on the measure, which then gained initial approval on a 23-9 vote. It needs a second vote, which is expected Thursday, to move to the House, where Democrats also are the minority and don’t have the same ability as Senate Democrats to filibuster. GOP House Speaker Todd Richardson backs the proposal.

If passed by the Legislature, it would be on the ballot for Missouri voters to decide either in the August primary or November general election.

WHERE ELSE IS THIS HAPPENING?

Missouri is among more than 20 states that have Religious Freedom Restoration Acts on the books. Missouri law already bans state and local government agencies from substantially limiting people’s right to follow their religious beliefs unless there is a compelling reason to do so.

The proposal in Missouri would go further by specifically addressing religious objections to same-sex marriage.

Lawmakers in Florida, which has a Religious Freedom Restoration Act, last week sent Republican Gov. Rick Scott a bill to specify that churches can’t be forced to marry same-sex couples. Scott has said he will sign it into law.

A measure moving forward in West Virginia would let people cite religious objections to state actions in certain court proceedings, and the Georgia Senate approved a measure barring government penalties against individuals or organizations that decline to provide services to couples based on a religious belief about marriage.

Onder said the Missouri measure is intentionally narrower in scope than some of those that have faced a backlash — for example, a proposal in Indiana last year that sparked a storm of criticism from businesses and supporters of gay rights. The proposal was eventually revised.

HOW ARE PEOPLE REACTING?

The American Civil Liberties Union and the national LGBT advocacy group Human Rights Campaign are among those opposing the measure.

Steph Perkins, executive director of the Missouri LGBT advocacy group PROMO, said in a statement that the organization agrees that religion is a fundamental right, but “those same religious beliefs cannot and should not be used as a reason to deny someone the same services that are offered to the rest of the public.”