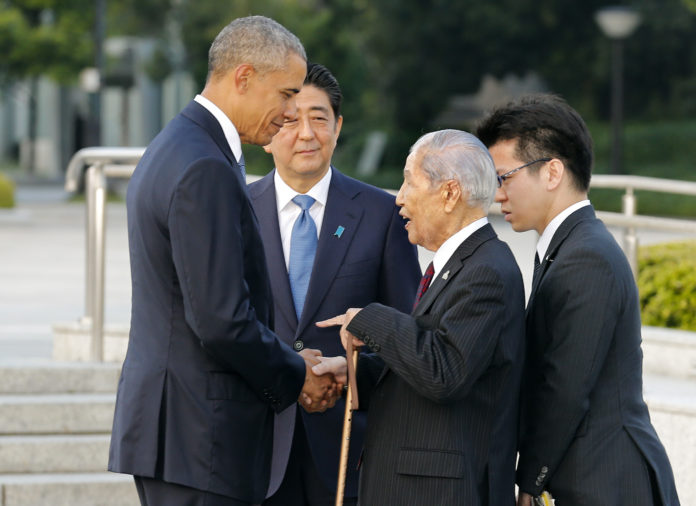 Obama spoke briefly with survivors who were in the audience for his remarks at Hiroshima Peace Memorial Park. One of the survivors stamped his cane emphatically while speaking to the president. Obama smiled as he listened to the survivors.

The president’s interaction with survivors was highly anticipated ahead of his historic visit. Obama did not apologize for the decision to bomb, but paid tribute to the victims and decried the horrors of war.

President Barack Obama has signed a guest book and laid a wreath during his historic visit to Hiroshima and its memorial park.

Here is what he wrote:

“We have known the agony of war. Let us now find the courage, together, to spread peace, and pursue a world without nuclear weapons.”

The United States dropped an atomic bomb on Hiroshima during the closing days of World War II, killing some 140,000 people.

Obama is the first sitting U.S. president to visit Hiroshima.

He also laid a wreath near the base of an arched memorial in Hiroshima Peace Memorial Park.

Abe is speaking at a wreath-laying with Obama in the city where the U.S. dropped the first atomic bomb. Abe says he sincerely respects Obama’s courage in deciding to visit Hiroshima.

Abe says the tragedy of Hiroshima must not be repeated again. He says he and Obama are determined to realize a world free of nuclear weapons, no matter how difficult that is to achieve.

President Barack Obama says the world has a shared responsibility to ask how to prevent the suffering that took place in Hiroshima 70 years ago from happening again.

Obama says the memory allows the world to fight complacency and fuels a common moral imagination. He’s also calling for a reduction in nuclear stockpiles and a move toward a world without nuclear weapons.

Obama is commenting after he became the first sitting U.S. president to visit Hiroshima. He laid a wreath near the base of the memorial.

President Barack Obama has arrived at Hiroshima Peace Memorial Park on a historic visit to the city where the U.S. dropped the first atomic bomb.

Obama and Japanese Prime Minister Shinzo Abe (shin-zoh ah-bay) entered the Hiroshima Peace Memorial Museum, where Obama is expected to sign a guest book. While at the park, Obama will also lay a wreath and deliver brief remarks.

He is now the first sitting U.S. president to make the trip that his predecessors have avoided. Some 140,000 people were killed when President Harry Truman unleashed the nuclear weapon in August 1945 in the closing days of World War II.

Obama will not apologize or second-guess Truman’s decision. Nor will he dissect Japan’s aggression in the war.

Obama instead will acknowledge the devastating toll of war and encourage the world to do better.

Barack Obama is the first sitting U.S. president to visit the hallowed ground of Hiroshima, site of the world’s first atomic bomb attack.

Obama arrived in Hiroshima after addressing U.S. and Japanese troops at nearby Marine Corps station.

Obama will pay tribute to the 140,000 people who were killed 70 years ago when the U.S. dropped the atomic bomb on Hiroshima in the final days of World War II. During brief remarks, he’s likely to also pitch his vision of a nuclear weapons-free world.

Obama will not apologize for the decision to use a nuclear weapon. Instead, he plans to acknowledge the devastating toll of war and couple it with a message that the world can — and must do — better.

President Barack Obama says his visit to Hiroshima will be an opportunity to honor the memory of all those lost during World War II.

Obama is visiting U.S. and Japanese troops at Iwakuni air station just before traveling to nearby Hiroshima for the first visit by a sitting U.S. president. He says his historic visit is a chance to reaffirm a commitment to pursuing a world where nuclear weapons are no longer necessary.

The president says his visit is a testament to how even the most painful divides can be bridged. He says it shows how former adversaries Japan and the U.S. can become not just partners but the best of friends and strongest of allies.

Obama is also praising the troops for their sacrifices to ensure the security of people around the world. He says the world mustn’t forget to honor those who have given everything for freedom.

Abe says what happened in Hiroshima should never be repeated.

Some 140,000 people were killed in Hiroshima near the end of World War II when the U.S. dropped at atomic bomb on the western Japanese city.

It was the first such attack anywhere in the world.

Abe commented at the conclusion of a summit of world leaders in Shima, Japan.

Hiroshima’s peace memorial park is being cleared of visitors in preparation for President Barack Obama’s visit.

But there were plenty of morning visitors to the park, and all had their own reasons for coming.

Kinuyo Ikegami, who is 82, came to light incense and chant a prayer.

Long lines of schoolchildren took turns bowing and praying beside her.

Retiree Tsuguo Yoshikawa took a walk in the park, and said it’s time for the U.S. and Japanese people to move forward without grudges.