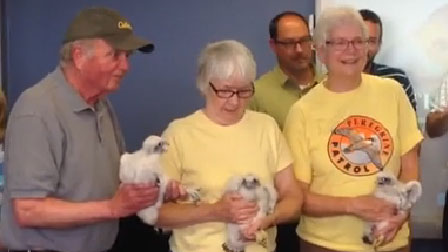 It’s a girl! And a boy! And another girl!

South Bend’s three peregrine falcon chicks were sexed and banded by the Indiana Department of Natural Resources on Friday afternoon, May 27.

The chicks are the offspring of Zeus and Maltese, the two peregrine falcons that live in a nest on the top of the County-City Building at 227 W. Jefferson Blvd. They hatched earlier this year.

The falcon couple laid a fourth egg that did not hatch. Zeus and Maltese reared four chicks in 2015.

Zeus, Maltese and the chicks can be seen on the city of South Bend’s falcon cam online.

The remarkable birds who live above my office have chicks–now being handed by naturalists at the County-City bldg pic.twitter.com/KmSkKwcN7i