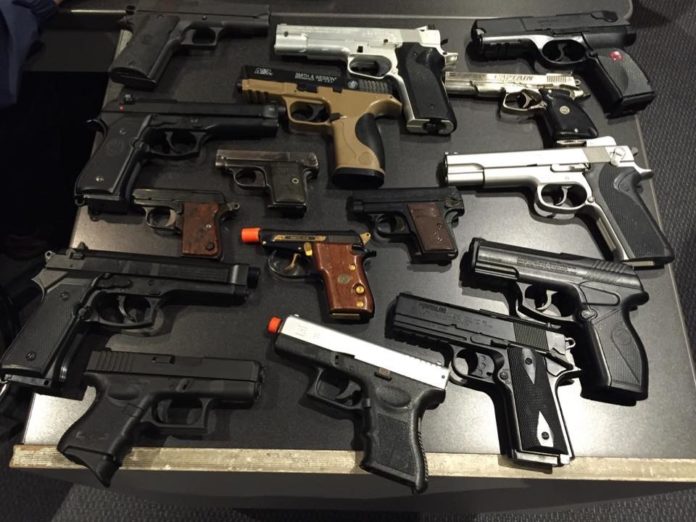 Wolfenbarger and Ruszkowski brought 16 guns to the studio. They asked McGill and Gordy Young if they could tell which were the real deal and which were fake.

The fake guns were either Airsoft or BB guns, except for one gun that was a cigarette lighter.

Scroll down to listen to the whole interview and see which guns are real and which are fake.

Wolfenbarger said some of the fake guns were purchased at local convenience stores for less than $20.

“They’re so realistic even though they are plastic,” he said. “Police officers have seconds to figure out if (a gun is) real or not. Especially in bad light or darkness, it’s difficult.”

Toy gun manufacturers put orange tips on toy guns and Airsofts, but can be taken off, Ruszkowski said. Those aren’t put on BB guns.

Sometimes, people who are illegally carrying guns might put orange tips on them or paint the guns orange, Ruszkowski said.

Even with orange tips placed only on fake and toy guns, if an officer can’t see the orange tip at the end of a gun because it’s in a holster, a pocket or tucked into a waistband, quickly determining if a gun is real or not can be extremely difficult, Wolfenbarger said.

In the photo above, the guns with a red line through the trigger are fake guns. The fake guns are either Airsoft or BB guns, though the small silver gun in the upper right hand corner is a cigarette lighter.(Krystal Vivian/95.3 MNC)

Anyone with questions about guns, whether they are real or fake, can contact the South Bend Police Department at 574-235-9201.