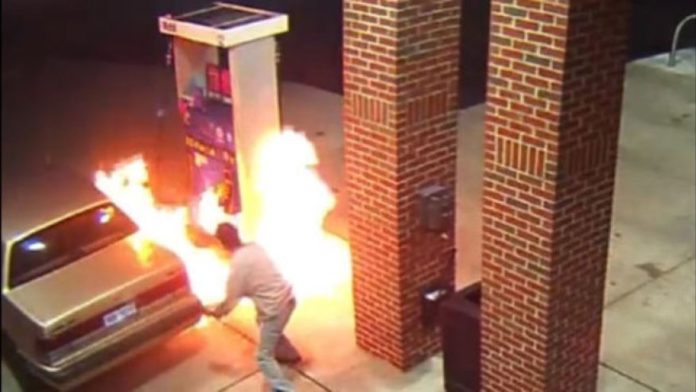 CENTER LINE, Mich. (AP) — A man with an apparent case of arachnophobia caused a fire at a suburban Detroit gas pump by putting a lighter to what he says was a spider near his fuel door.

WJBK-TV reports Saturday that he escaped injury and his vehicle suffered little damage, but the gas pump was destroyed. Susan Adams, a clerk at the gas station shut off the pump from indoors and called the fire department.

The motorist can be heard on the surveillance video at the Center Line station asking: “Is that a spider in there?” The video then shows flames erupting along the car’s side, the pump and the pavement.

The man darts to safety and later uses a fire extinguisher to put out the flames. A spider is not seen.

The clerk says he apologized the next day.

“He was sorry. He apologized. He was sorry. He didn’t know and, it’s just one of those things that happened. Stupidity. That’s all I can call it…pure stupidity,” Adams told FOX 6.