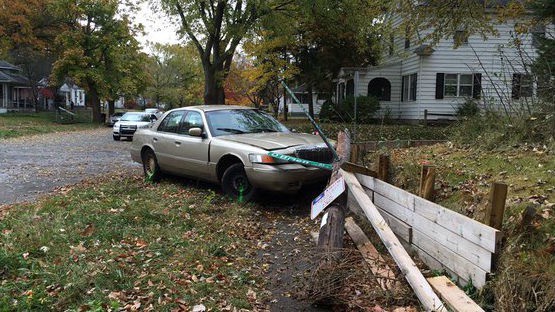 Two people were shot in the 1700 block of North O’Brien Street in South Bend.

South Bend Police were called to the scene just before 3 p.m. on Saturday, Oct. 26.

When officers arrived they found a 31-year-old male with a gunshot wound to the torso, according to a news release from South Bend Police.

Officers also found a car crashed into the O’Brien Street and Marquette Boulevard intersection sign, according to 95.3 MNC’s reporting partners at ABC 57.

Police say that vehicle along with another car on O’Brien Street had multiple bullet holes, ABC 57 reported.

A window of a home on the corner of O’Brien Street was also shot out, ABC 57 reported.

The victim was transported to the hospital where he was being treated for the gunshot wound, the news release stated. The victim was last reported as being in critical but stable condition.

A second victim, a 23-year-old male, arrived at Memorial Hospital in South Bend on his own with a gunshot wound to his hand. He was treated for his injuries and was last listed in stable condition, the news release stated.

Several people have been interviewed by detectives but no arrests had been made by 12 a.m. on Sunday.

As this investigation continues, inverstigators are asking anyone with information about the crime or any criminal activity to contact Michiana Crime Stoppers at 288-STOP or South Bend Police at 574-235-9201.