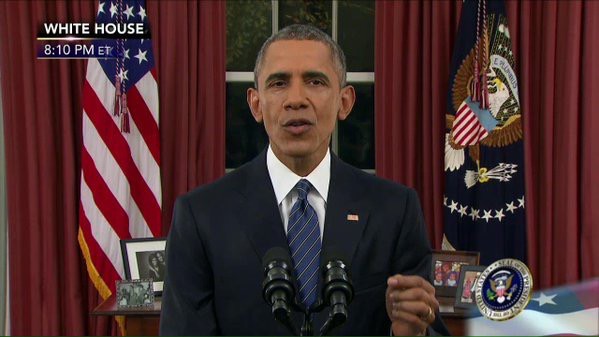 WASHINGTON (AP) — The latest on President Barack Obama’s Oval Office address on the threat of terrorism and the government’s response following attacks in California and Paris (all times local):

Two Republican presidential candidates who want to replace President Barack Obama in the White House were not impressed with his Oval Office speech on the terrorist threat.

Florida Sen. Marco Rubio said people are growing scared because “we have a president who is completely overwhelmed” by the terrorist threat. He said on Fox News that he heard nothing new in the speech except a call for gun control, which would make no difference. And he said the president may have made things worse, rather than making things better. He said the Islamic State group is rapidly expanding its influence around the world.

Former Florida Gov. Jeb Bush, a rival for the GOP nomination, said “Obama has finally been forced to abandon the political fantasy he has perpetuated for years that the threat of terrorism was receding.”

Bush said it’s time to remove the constraints from the military and intelligence operations and “put in place an aggressive strategy to defeat ISIS and radical Islamic terrorism as I have proposed.”

President Barack Obama misspoke when he said the female assailant in the San Bernardino shootings, Tashfeen Malik, came to the United States under the visa waiver program.

In a prime-time televised address, Obama said he has “ordered the departments of State and Homeland Security to review the visa waiver program under which the female terrorist in San Bernardino originally came to this country.”

Malik came to the U.S. on a K-1 visa, known as a “fiancée visa,” when she moved to the United States to marry Syed Farook, her husband and accomplice in the massacre in the Southern California city last week.

The White House has acknowledged the error.

President Barack Obama says the U.S. and its allies are stepping up the fight against the Islamic State group.

He says the U.S. is working with allies, such as Britain and Germany who have begun bombing targets in Syria. The U.S. has increased its bombing of Islamic State oil infrastructure and will continue to train and equip moderate rebels in Iraq and Syria.

The U.S. has recently added special operations forces in both Iraq and Syria,, but Obama continues to reject placing regular troops on the ground.

Obama says the U.S. is also working with allies to cut off the group’s financing and will continue to enhance intelligence gathering and sharing.

President Barack Obama says the American Muslim community needs to be a partner in the fight against radical Islam.

Obama’s remarks were part of a prime-time address on the threat of terrorism and the fight against the Islamic State group in Iraq and Syria. At least one of the suspected shooters in the past week’s massacre in San Bernardino expressed support for the Islamic State online.

Obama is calling the Islamic State “thugs, killers” and a “cult of death.” He says they represent a “tiny fraction” of the Muslim community.

The president says the West is not at war against Islam. He is cautioning Americans not to single out Muslims.

President Barack Obama says the U.S. can and must make it harder for would-be mass shooters to kill by making it harder for them to obtain guns.

Obama is giving an Oval Office address on terrorism and the U.S. response following attacks in California and Paris. He’s calling for Congress to prohibit people suspected of terrorism or on the no-fly list from buying guns.

Obama says he knows some people reject all gun safety measures. But he says no matter how effective law enforcement and intelligence is, they can’t identify every would-be shooter. Obama says it’s a matter of national security to prevent those people from getting guns.

Obama has urged stricter gun laws following the California shootings, but like previous mass shootings, those calls have met resistance from gun control opponents. Gun rights advocates oppose the no-fly list proposal because they say it violates the rights of people who haven’t been convicted of a crime.

President Barack Obama says he understands why Americans are worried about the threat of terrorism but is reassuring Americans the U.S. will overcome it.

Obama says “we will prevail by being strong and smart.” He says Americans cannot give into fear.

President Barack Obama says it’s clear the two killers in the California shootings had gone down the “dark path of radicalization.”

Obama is giving an Oval Office address on terrorism and the U.S. response following attacks in California and Paris. He’s calling it an “act of terrorism designed to kill innocent people.”

The podium is set in the Oval Office for President Barack Obama’s address on terrorism and the threat posed by the Islamic State group.

Obama is scheduled to speak to the nation at 8 p.m. EST. The address comes as recent attacks in Paris and California have raised concerns that the U.S. and other countries aren’t doing enough to prevent terror attacks.

This is only the third time Obama has given an Oval Office address, an event reserved for major, serious topics.

Typically, the president delivers Oval Office addresses from behind his desk. But Obama’s staff arranged a podium in the Oval Office where Obama will stand, with his desk and the American flag behind him.

Administration officials say Obama will focus on the evolving terrorist threat and what government is doing to keep people safe. He’s not expected to announce major policy changes.