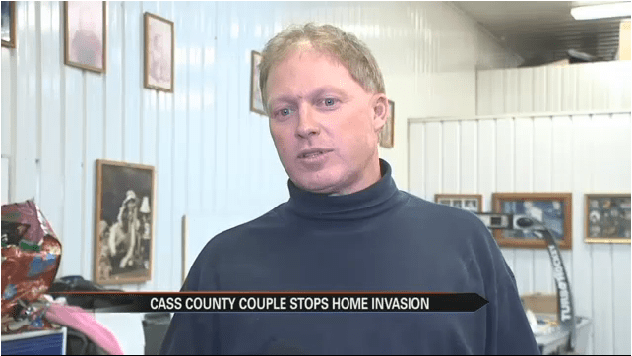 A Dowagiac, Mich., couple acted quickly to stop a man they said broke into their home on Tuesday night, Dec. 8.

Leslie Malin told our news partners ABC 57 that she noticed the door of the family office was open Tuesday night and told her husband about it.

“When I confronted him, he said ’don’t make me shoot you,’” Michael Malin told ABC 57. “And I just tackled him. Luckily my wife was there to help me.”

Adrenaline kicked in for the couple as they thought of their three children, their daughter’s friend who was sleeping over and the four family pets.

Michael pulled the suspect’s shirt over his head and held him down while Leslie laid on top of him until police arrived about five minutes later and arrested the suspect.

The suspect, later identified as a 39-year-old white man, didn’t have a gun. He was charged with breaking and entering, assault and battery and larceny. His name is being withheld until he is arraigned.

The couple’s sons slept through the incident and their daughter told ABC 57 that she was proud of her parents.