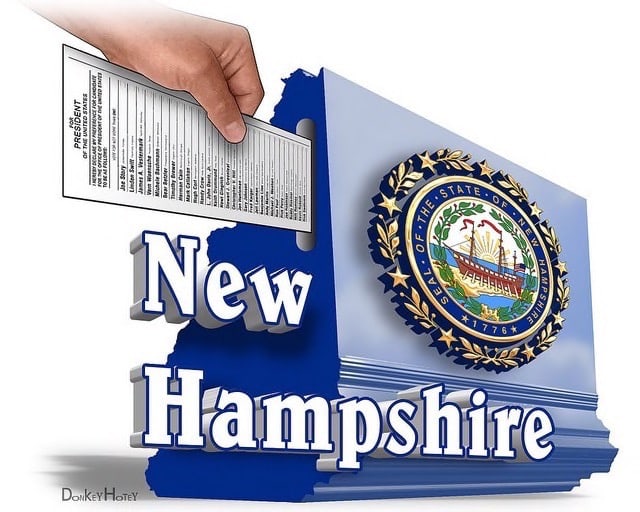 MANCHESTER, N.H. (AP) — The Latest developments from the 2016 presidential campaign, with the focus Tuesday on the New Hampshire primary (all times local):

And the Florida senator — who finished a surprising second in the leadoff Iowa caucuses — says he has a good idea why he’s in a fight for third place with Texas Sen. Ted Cruz and former Florida. Gov. Jeb Bush.

Rubio is pointing to his performance in the last debate before the primary.

He tells supporters: “I did not do well on Saturday night.”

Exit polling in New Hampshire shows that Democratic presidential candidate Bernie Sanders won the support of about 9 in 10 voters who thought honesty was important.

One of the questions asked of voters was which of the two candidates — Sanders or Hillary Clinton — is honest and trustworthy.

Half said they think only Sanders is, while about 40 percent said they both are. Few said only Clinton is.

Nearly all of those who said only Sanders is honest and trustworthy said he got their vote.

The New Jersey governor had banked on a strong finish in Tuesday’s New Hampshire primary, but he’s on track to end up far off the pace despite holding more than 70 town halls events over the past few months.

It’s a tough blow for a candidate whose campaign had trouble from the start about raising money and building support in a crowded field dominated by another brash East Coaster: businessman Donald Trump.

Christie tells supporters that he’ll wait to see the final New Hampshire results before making a decision about the way ahead.

But he says he can do that best from home, and not a hotel room in South Carolina — the site of the next Republican contest.

Donald Trump is basking in his victory in Tuesday’s Republican presidential primary in New Hampshire and says that America under his leadership will “start winning again.”

Trump is telling supporters that he’ll be the “greatest jobs president God ever created.”

He’s promising that if he’s commander in chief, he’ll “knock the hell” out of the Islamic State group and negotiate what he says would be better trade deals.

A Trump presidency, he says, would mean “nobody is going to mess with us.”

She’s back in the pack among Republicans in New Hampshire, but the fight isn’t going out of Carly Fiorina.

The Republican presidential candidate tells supporters at a country club in Manchester that “I’m not going to sit down and be quiet, and neither are you.”

She’s taken the stage with her husband, Frank, by her side. And what’s playing in the background? “I Won’t Back Down,” by rocker Tom Petty.

Kasich finished behind Donald Trump. Bush — a former Florida governor — is in a close race with two senators — Ted Cruz of Texas and Marco Rubio of Florida — for third.

Bush spokesman Tim Miller says Kasich “ran a one-state campaign” in New Hampshire and doesn’t have “a viable path” to the nomination.

The next Republican contest is in South Carolina later in February, and Miller says the Bush campaign feels “very confident about our position” in the state.

As for Kasich, Miller contends that the former congressman “doesn’t have a constituency past New Hampshire.”

Kasich emerged from the pack of candidates to finish behind billionaire businessman Donald Trump on Tuesday night.

Kasich’s campaign manager says he expects an increased flow of contributions to the candidate’s campaign after the strong showing.

That’s according to two people who were briefed on the meeting. They are telling The Associated Press that the get-together is set for the famed Sylvia’s Restaurant in Harlem.

They spoke on condition of anonymity because the information had not yet been publicly released.

Sharpton isn’t immediately responding to a request for comment.

But for the former secretary of state, it’s time to get back to the issues: campaign finance reform, equal pay for women, the lead-tainted drinking water in Flint, Michigan.

Clinton also wants younger voters to support her campaign as the race goes on.

She says she knows she has “some work to do particularly with young people.”

The fight goes on for Hillary Clinton.

Even after losing to Bernie Sanders in the Democratic presidential primary in New Hampshire on Tuesday, Clinton is promising to take her fight for the nomination to the rest of the country.

And if she feels spurned by New Hampshire voters, she’s not showing it to supporters in Hooksett, New Hampshire.

She tells them: “I still love New Hampshire, and I always will.”

Exit polls are helping shed some light on the various strands of support among voters in New Hampshire’s Republican presidential primary.

Donald Trump is backed by voters looking for an outsider and those who made up their minds a while ago.

John Kasich does best with voters looking for a candidate with political experience — along with moderates, better educated voters and those who made their vote decision in the past few days.

Ted Cruz is supported by many voters who are very conservative and evangelical Christians.

Marco Rubio does best among voters for whom experience and electability is important.

Thanks to his New Hampshire win, Donald Trump will take the lead in the race for delegates for the Republican National Convention.

It won’t be much of a lead.

There are only 23 delegates at stake in New Hampshire’s Republican primary, and they are awarded proportionally, based on the statewide vote.

Trump will win at least nine. The final tally depends on how many candidates get more than 10 percent of the vote, the threshold needed to qualify for delegates.

How did Bernie Sanders do it in New Hampshire?

According to exit polls, he won the Democratic presidential primary Tuesday by getting a majority of votes from both men and women, independents and voters under 45.

Rival Hillary Clinton is backed a majority of voters aged 65 and older and those with incomes over $200,000.

Independents make up nearly 4 in 10 voters in the primary, and Sanders is winning nearly three-quarters of their votes.

Gratitude for the Granite State — that’s the word from Bernie Sanders.

After his New Hampshire victory, the Vermont senator has thanked his supporters with this tweet: “When we stand together, we win. Thank you, New Hampshire!”

A big victory for Donald Trump in New Hampshire, a big victory celebration for the billionaire businessman.

When word came just at 8 p.m. that Trump was declared the winner, his supporters at campaign headquarters in Manchester shouted his name and they waved foam fingers emblazoned with the phrase, “You’re Hired.”

With 24 at stake, Sanders stands to gain at least 13. Hillary Clinton will receive at least seven.

Clinton remains ahead in the overall delegate count due to support from superdelegates — the party officials who can support the candidate of their choice.

Including superdelegates nationwide, Clinton has amassed at least 392 delegates and Sanders at least 42.

The magic number to clinch the nomination is 2,382.

The New Hampshire primary winners are Donald Trump on the Republican side and Bernie Sanders in the Democratic race. Each took the top spot after second-place finishes in the Iowa caucuses.

Trump’s first victory of the 2016 White House race means he’s no longer a political rookie but the front-runner for his party’s presidential nomination.

And the win for Sanders completes his rise from presidential long shot to legitimate challenger for the Democratic nomination against Hillary Clinton.

New Hampshire’s secretary of state says voter turnout in Tuesday’s presidential primary is likely to be slightly higher than in 2008.

He says his visits to various polling places Tuesday lead him to believe his predictions are on par.

The clock is ticking in New Hampshire: The final polls are set to close at 8 p.m. in the first-in-the-nation primary contest of the 2016 presidential election.

Polls started opening at 7 a.m., except for a few communities that begin voting just after midnight.

Call them the late deciders.

Nearly half of the voters in Tuesday’s Republican primary in New Hampshire are saying they made up their mind in the last week. On the Democratic side? More than half say they decided before that.

The findings are among some of the early results of the exit poll conducted by Edison Research for The Associated Press and the television networks.

What’s at stake on the delegate front in the New Hampshire primary?

The GOP count after the Iowa caucuses: eight for Ted Cruz, and seven each for Donald Trump and Marco Rubio. It takes 1,237 delegates to win the Republican nomination.

Hillary Clinton holds a big delegate lead, mainly due to on endorsements from superdelegates. Those are the party officials who can support the candidate of their choice.

Clinton has 385 delegates and Bernie Sanders has 29.

It takes 2,382 delegates to win the Democratic nomination.

Move it along, Mr. Trump. And the entourage with you, too.

That’s the message from the moderator at a New Hampshire polling site — the Webster Elementary School in Manchester.

Jim Townsend’s in a huff over the commotion caused by Trump’s visit — and the reporters, Secret Service members and Trump supporters blocking voters trying to get in and out of the polling place.

Here’s how Townsend puts it: “Please, no one can get through to vote thanks to Mr. Trump. Let’s move it along.”

It’s not clear yet whether New Hampshire’s Democratic presidential primary will break for Bernie Sanders or Hillary Clinton. But there’s no doubt about where their next showdown will come — it’s the Nevada caucuses on Feb. 20.

And now Nevada Democrats say the candidates will participate in a town-hall event on Las Vegas two days before those caucuses.

The state party chairwoman, Roberta Lange, says MSNBC and the Spanish-language television network Telemundo have agreed to host the event.

An outside group that’s helping Republican presidential candidate Marco Rubio is spending more than $1.5 million on digital and media advertisements in South Carolina and Nevada — the next states on the 2016 election calendar.

The new expenditures are by Conservative Solutions PAC, a super political action committee that faces no contribution limits.

All but about $200,000 is for South Carolina. That’s according to reports filed with the Federal Election Commission.

Conservative Solutions is the second-most-active super PAC in the presidential race so far. Only Right to Rise, which is boosting Republican Jeb Bush, has spent more on television and radio.

Republican voters in Tuesday’s New Hampshire primary are much more negative about their politicians than Democrats are about theirs.

That detail comes from early results of the exit poll conducted by Edison Research for the Associated Press and television networks.

Early results from exit polling in New Hampshire are showing that voters are deeply unhappy with the way the federal government is working.

The exit polling is being conducted by Edison Research for the Associated Press and television networks.