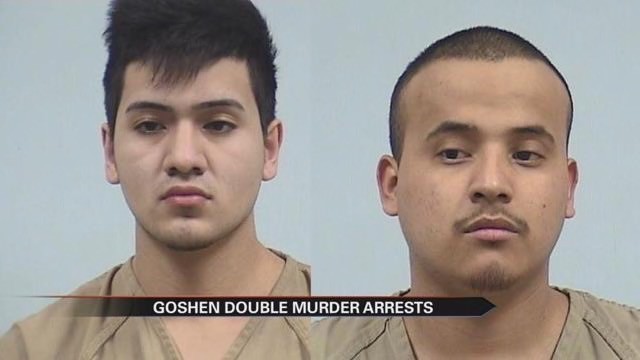 Goshen Police believe the shooting deaths of Jose Nava-Orozco, 22, and Marco Carmona-Gonzalez, 43, were motivated by gang violence, according to a news issued by the Elkhart County Prosecutor’s Office and and the Goshen Police Department.

Police are seeking two murder charges each both 22-year-old Diego Ramos and 19-year-old Luis Rivas in connection with the double homicide, which investigators say took place around 5 a.m. on Sunday, March 13, at Brookside Manor in Goshen.

On Friday, March 18, Goshen Police released that statement in a news release, along with information they gained that shows suspect Diego Rivas’ cell phone was used to search the internet for images of Nava about 20 minutes before the murders happened.

Less than half an hour later, Ramos is said to have told his mom Nava was dead.

This time frame was well before the victims’ ID’s had been released to the public.

The following is the news release from the Elkhart County Prosecutor’s Office and the Goshen Police Department issued on Friday, March 18, 2016:

Within one week of the murders of Jose Nava Orozco, age 27, and Marco Antonio Carmona Gonzalez, age 43, both of Goshen, on Sunday, March 13, 2016, the Goshen Police Department has arrested Diego Armando Ramos, age 22, of Elkhart, and Luis Alberto Rivas, age 19, of Goshen, for the murders.

On 3/16/2016, Diego Ramos was arrested at 2790 College Avenue, Goshen at approximately 3:30pm Luis Rivas was arrested at 220 W. Wilden Ave, Goshen at approximately 10:30pm. Probable Cause for the crime of Murder was established against both Ramos and Rivas on Friday, March 18, 2016, when a Judicial Officer reviewed facts and circumstances of the case.

No bond was set for Ramos or Rivas at that time, pending further review.

An initial hearing will be held in the Elkhart Circuit Court on Thursday, March 24, 2016, at approximately 8:30 a.m. A formal charging decision will be made by the Prosecuting Attorney on or before Wednesday of next week.

Although numerous law enforcement officers from multiple agencies have dedicated significant resources toward this investigation, it is ongoing. Accordingly, other than the information in the publicly accessible redacted Affidavit for Probable Cause, filed today in Superior Court 1, many details will remain confidential until further proceedings or a trial is had with respect to each suspect.

As indicated in the redacted Affidavit of Probable Cause, the shooting does appear to be motivated by gang violence. Numerous witnesses have come forward and identified the two individuals that had possession of the weapon believed to be used in the murder, namely Rivas and Ramos.

Further evidence demonstrates that Rivas’ cellular phone was utilized to search the internet for images of Jose Nava approximately 20 minutes before the murders. Less than 30 minutes after the murders, Ramos advised his mother that Nava was dead, well before the identities of the victims had been released to the public by police.

During the investigation, several casings and bullets were recovered from the scene of the murder, Ramos’ home, and Ramos’ vehicle. After forensic analysis of the casings from each of these locations, it was determined they had all been fired from the same weapon. In addition, casings from an unrelated event in October, 2015, in which Ramos was observed by multiple witnesses firing a weapon were also forensically examined and found to have been fired from the same weapon that had fired the casings found at Ramos’ residence, in his vehicle, and at the scene of the murder.

Both Ramos and Rivas provided statements to law enforcement officers denying any involvement in the murders; however, much of the information provided was specifically contradicted by other information gathered during the investigation. In addition, although the two initially denied knowing each other at all, Ramos eventually disclosed that he did know Rivas, and that Rivas had spent the night with him the night of the murders.

Once formal charges are filed by the Prosecuting Attorney, the case will proceed through the normal adversarial pre-trial process to ensure the rights of the Defendants are protected.