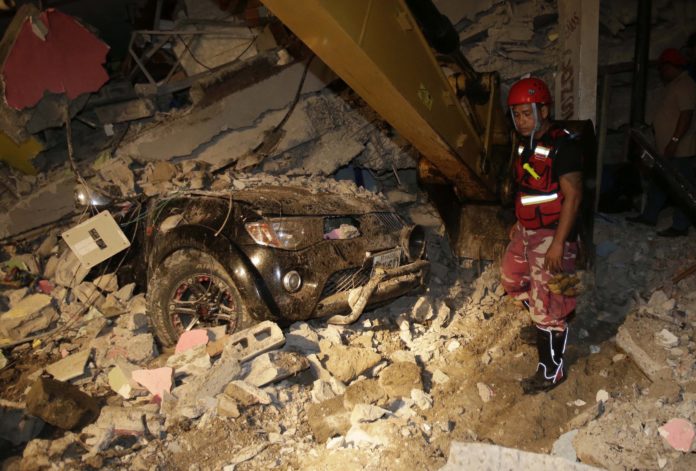 QUITO, Ecuador (AP) — Officials say the death toll from the strongest earthquake to hit Ecuador in decades is expected to rise as rescuers reach the sparsely populated area of fishing ports and tourist beaches where the magnitude-7.8 quake was centered.

The quake that killed more than 200 people flattened buildings and buckled highways along the country’s coast.

The mayor of Pedernales, near the epicenter, says, “This wasn’t just a house that collapsed, it was an entire town.”

Authorities in Ecuador say landslides are making it difficult for emergency workers to reach the hardest hit areas and damage stretches for hundreds of miles.

Meantime, officials in Japan say U.S. military aircraft are being added to the mix in an effort to speed relief supplies to communities devastated by two powerful earthquakes that killed at least 41 people.

Thousands of rescue workers are searching a debris-strewn village in southern Japan for 11 missing people. More than 1,000 buildings were damaged in the two earthquakes.

Landslides from Saturday’s magnitude-7.3 earthquake have blocked roads and destroyed bridges, making it difficult to access the area east of Kumamoto, a city of 740,000 on the southwestern island of Kyushu.

Overnight rainfall did not appear to cause any more landslides.

Japanese media reported that the number of people taking shelter has doubled to more than 180,000.

Toyota reports it will halt vehicle assembly for a time due to a quake-caused parts shortage.

An expert says “there is no causal relationship between the earthquakes in Ecuador and Japan.”

David Rothery, a professor of planetary geosciences at The Open University, northeast of London, says Ecuador’s earthquake is about six times stronger and has released about 20 times more energy than the one in Japan a day before.

Rothery told The Associated Press today that bigger quakes last longer, so both the strength of the shaking and the duration contribute to the total energy.

Rothery says the quake in Ecuador began deeper underground than the recent Japan quakes, which would have lessened the shaking on the ground. But the greater loss of life and greater damage in Ecuador can be attributed to the country’s less stringent construction codes.