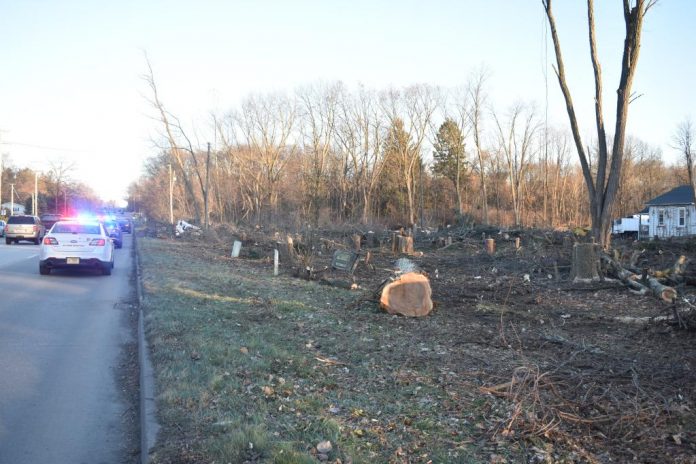 A man died after he was struck by a falling tree.

It happened around 3 p.m. on Sunday, Dec. 22, in the 1800 block of Cleveland Road in South Bend, according to St. Joseph County Police.

Sisk was transported to Memorial Hospital, where he was pronounced dead.

On Sunday, December 22, 2019 at approximately 3:00 p.m. county police patrol officers were dispatched to 18644 Cleveland Road in South Bend for reports that a male that had been struck by a fallen tree.
Sheriff Redman sends his condolences to the family of William Sisk, age 36 of South Bend, killed Sunday by the fallen tree.
Sunday afternoon five employees of New Image Tree Service were cutting down and clearing trees from a wooded lot at 18644 Cleveland Road in Clay Township. The victim was a groundsman, responsible for clearing brush and limbs after the trees were cut down.
At the time of the accident a large tree was being cut by an employee intending it to fall to the south, away from Cleveland Road. However, while a back cut was being made on the north side by the worker cutting the trunk, the tree began to fall to the north towards the worker cutting the tree and victim. The tree fell and landed to the north, striking and trapping the victim underneath near the base of the tree trunk.
Medics and county police arrived with seconds of the dispatch from nearby Clay Fire Station 21. After responders arrived, the other employees used a bobcat skid loader to lift the trunk and free the victim from underneath. The victim was then transported by ambulance to Memorial Hospital, where he was pronounced dead soon after arrival. The incident is being investigated by detectives of the St. Joseph County Police Department and the County Coroner’s office.