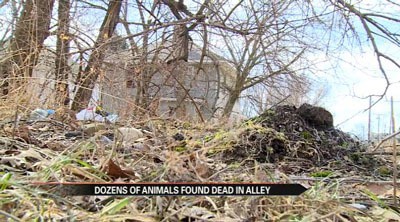 A South Bend man was arrested on Thursday, June 19, in connection to 10 dead cats found in an alley near his home in March 2014.

Ares Lee Howard, 30, was charged with three counts of killing a domestic animal and eight counts of mutilating a vertebrae animal. All charges are class D felonies.

The bodies of 10 cats and several squirrels, rabbits and what may have been an opossum were found in an alleyway near East Indiana Avenue in South Bend on March 23, 2014. A neighbor told police that two of the cats belonged to her and had been missing since Valentine’s Day, according to court documents filed in the case. Another resident said one of the cats belonged to her.

Necropsies, or animal autopsies, were performed on eight of the 10 cats and found that all eight had small pellets or .22 caliber bullets in their bodies. The injuries killed at least seven of the cats, but cause of death couldn’t be determined for one cat because of its condition, according to court documents. Necropsies couldn’t be performed on two of the cats because of their condition.

Howard was identified as a possible suspect by at least two neighbors who said that he posted signs that read “We shoot trespassers and drug dealers” in the alley but took them down after news crews arrived to report on the dead animals, according to court documents. Another neighbor told police he saw Howard shoot a cat with a high powered pump-action pellet rifle and that Howard baited animals with cat food and hot dogs.

He denied any knowledge of the dead animals when police interviewed him on March 24, 2014.

Howard’s wife allowed police to search the home on March 24. They found a Daisy BB gun, a Ruger .22 caliber pistol and boxes of .22 caliber ammunition. They also found a bedroom with “Ares” painted on the wall that had a clear view of the alleyway and a makeshift hunting blind made with a blue blanket in a window of the garage, according to court documents.

Officers also found two holes in the fence large enough to see through or fire a gun through. The neighbors’ yards and the alley could be seen through the holes. Other holes in another area of the fence provided a view of an open lot.

When police returned on April 3, they recovered an Acer laptop. In the days after news reports aired and the police report was filed on the animals found in the alley, someone used the Internet to search “how to kill ferrel (sic) cats” and for information about Indiana search warrant laws and other related topics, according to court documents.

County, City facilities will remain closed to the public for now