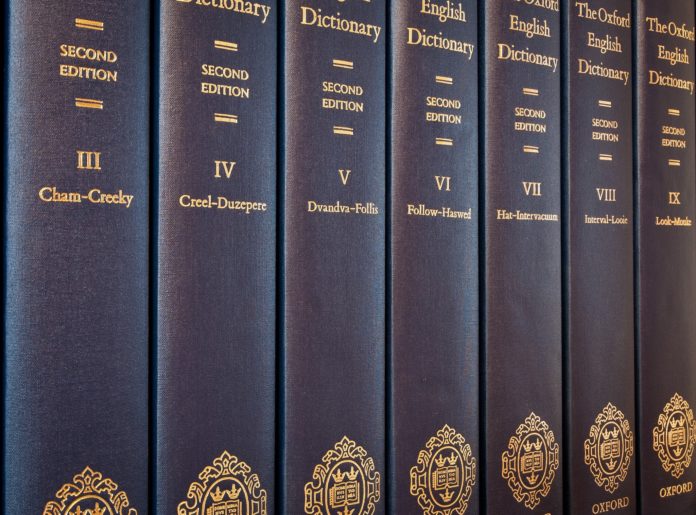 A manic pixie dream girl took her fur baby on a date with a hangry Redditor to a cat cafe at wine o’clock.

Don’t get butthurt when someone asks you to stop manspreading, bruh.

And that’s just the beginning.

The Oxford English Dictionary announced on Wednesday, Aug. 26, that it is adding more than 1,000 new words to the dictionary in September, according to TIME. The words bolded in the sentences above are on the list, which highlights new phrases and words commonly used in everyday conversation. Many of the words are common Internet slang (see: pwnage) or reflective of new trends (see: cupcakery).

The Oxford dictionary is updated four times a year. Each update also includes revised entries, sub-entries and new senses. New words are added if the editors note that the words are continuously used and are not just trendy phrases.

Some of the words included are:

beer o’clock: n., an appropriate time of day for starting to drink beer

bruh: n., a male friend (often used as a form of address)

cat cafe: n., a café or similar establishment where people pay to interact with cats housed on the premises

cupcakery: n., a bakery that specializes in cupcakes

fast-casual: adj., denoting or relating to a type of high-quality self-service restaurant offering dishes that are prepared to order and more expensive than those available in a typical fast-food restaurant

fatberg: n., a very large mass of solid waste in a sewerage system, consisting especially of congealed fat and personal hygiene products that have been flushed down toilets

fat-shame: v., cause (someone judged to be fat or overweight) to feel humiliated by making mocking or critical comments about their size

hangry: adj., bad-tempered or irritable as a result of hunger

MacGyver: v., make or repair (an object) in an improvised or inventive way, making use of whatever items are at hand

manic pixie dream girl: n., (especially in film) a type of female character depicted as vivacious and appealingly quirky, whose main purpose within the narrative is to inspire a greater appreciation for life in a male protagonist

manspreading: n., the practice whereby a man, especially one travelling on public transport, adopts a sitting position with his legs wide apart, in such a way as to encroach on an adjacent seat or seats

mic drop: n., an instance of deliberately dropping or tossing aside one’s microphone at the end of a performance or speech one considers to have been particularly impressive

Mx: n., a title used before a person’s surname or full name by those who wish to avoid specifying their gender or by those who prefer not to identify themselves as male or female

pocket dial: v., inadvertently call (someone) on a mobile phone in one’s pocket, as a result of pressure being accidentally applied to a button or buttons on the phone

pwnage: n., (especially in video gaming) the action or fact of utterly defeating an opponent or rival

rando: n., a person one does now know, especially one regarded as odd, suspicious, or engaging in socially inappropriate behavior

swatting: n., the action or practice of making a hoax call to the emergency services in an attempt to bring about the dispatch of a large number of armed police officers to a particular address

wine o’clock: n., an appropriate time of day for starting to drink wine