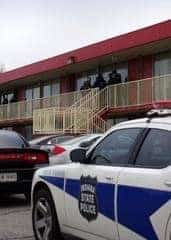 A week-long drug investigation by the Indiana State Police concluded with the arrest of nine individuals over a three day period in Plymouth. The investigation ended Friday, Dec. 4, around 10 a.m. when members of the state police SWAT team and troopers form the Bremen Post raided three rooms at two motels in Plymouth.

Search warrants for the rooms were obtained after the investigation revealed several individuals from both motels were purportedly selling meth and marijuana from their rooms, according to a news release from Indiana State Police.

One individual was arrested in his room at the Economy Inn, Alex D. Bradke, 28, of Plymouth. He was charged with dealing and possession of methamphetamine, the news release states.

Four subjects were arrested at the Red Rock Inn. Rhonda S. Harlan, 37, and her husband Wayne E. Harlan, 44, of Plymouth, were taken into custody and charged with possession of methamphetamine, dealing methamphetamine, and maintaining a common nuisance. Jordan C.W. Kilgore, 29, of Plymouth, was arrested for dealing marijuana. Stephen Wood, 25, of North Judson was arrested on an outstanding body attachment warrant through St. Joseph County, the news release states.

Two other individuals were detained during the drug investigation and were released. Their cases will be reviewed by the Marshall County Prosecutor’s office for criminal charges.