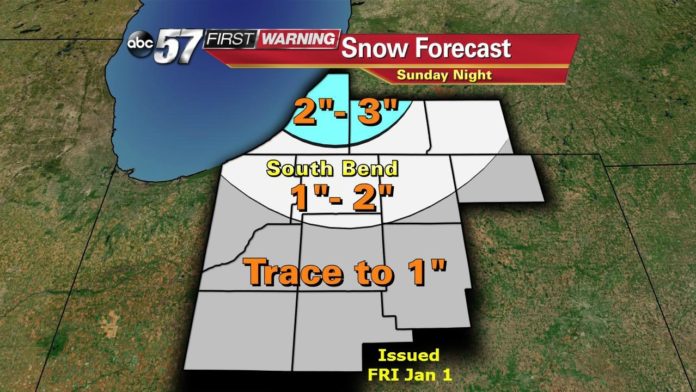 The next round of accumulating snowfall may hit Sunday night, Jan 2, before many people head back to work and school after the holiday break, according to the ABC 57 First Warning Neighborhood Forecast.

A big snow is not expected, however, this is the most significant snowfall in over a month, enough to snow to slow the morning drive on Monday morning.

Models as of Friday night appear to be converging on an inch or more for South Bend. Typical with lake effect, the snow will not be constant but come in waves. The best estimate on timing is after midnight into early Monday morning.

Areas north of U. 20 will most likely see an inch or more with most of Berrien County and parts of Cass County in Michigan in the two to three inch range. Confidence at this time is moderate, areas of more then three inches could be possible under stagnant lake effect bands, this forecast could change.

The fine details of the forecast will come more into focus by Sunday evening.

Check out ABC 57 for the latest forecast.