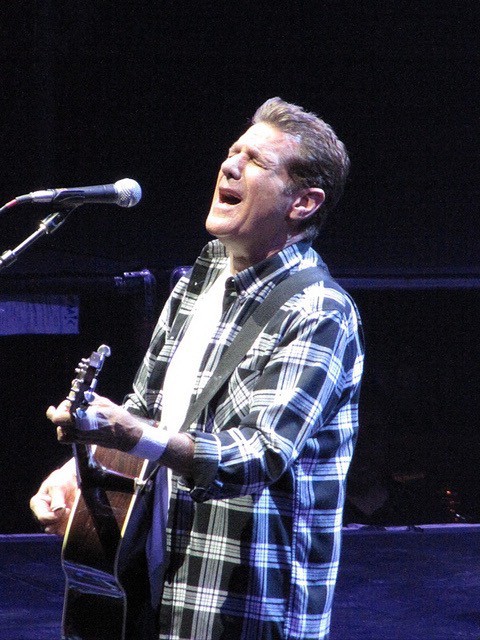 NEW YORK (AP) — The latest on the death of Glenn Frey, a co-founder of the rock band the Eagles (all times local):

Tritt is among those reacting to Frey’s death Monday in New York at age 67. Other celebrities are joining in to pay tribute to the Eagles guitarist.

Huey Lewis tweets Frey was a brilliant songwriter and calls him “talented, funny, cynical and sweet.”

Recording Academy chief Neil Portnow says Frey was a key part of one of the most storied bands in pop history. He says Frey’s death is a “huge loss” for the music community.

Country star McGraw tweets that Frey’s music was “personally inspirational” and he leaves a timeless legacy.

Martin went online to recall Frey as a friend from the early days, adding, “We loved you.”

Actor Rob Lowe tweeted the soundtrack of his life was created by Frey. Lowe says he’s devastated at the loss of “one of the nicest men” he ever met.

Eagles member Don Henley says bandmate Glenn Frey was like a brother to him.

Frey died Monday in New York. Henley says they were family and experienced some dysfunction but the bond they forged 45 years ago was never broken, even during the 14 years the Eagles were dissolved.

Frey and Henley became one of history’s most successful songwriting teams with such hits as “Hotel California” and “Life in the Fast Lane.”

Henley says Frey “started it all” and was “the spark plug, the man with the plan.” He says Frey had “an encyclopedic knowledge of popular music and a work ethic that wouldn’t quit.”

Glenn Frey, who co-founded the Eagles and with Don Henley became one of history’s most successful songwriting teams with such hits as “Hotel California” and “Life in the Fast Lane,” has died.

Frey was 67 and had been battling multiple ailments. He died Monday. The band’s website says he died in New York.

Guitarist Frey and drummer Henley formed the Eagles in Los Angeles in the early 1970s, along with guitarist Bernie Leadon and bassist Randy Meisner. They would become a top act over the next decade, embodying the melodic California sound.

An Eagles greatest hits collection from the mid-1970s and “Hotel California” are among the best-selling albums in history.

Frey was born in Detroit and was raised in the suburbs. His solo hits include “The Heat Is On” and “Smuggler’s Blues.”