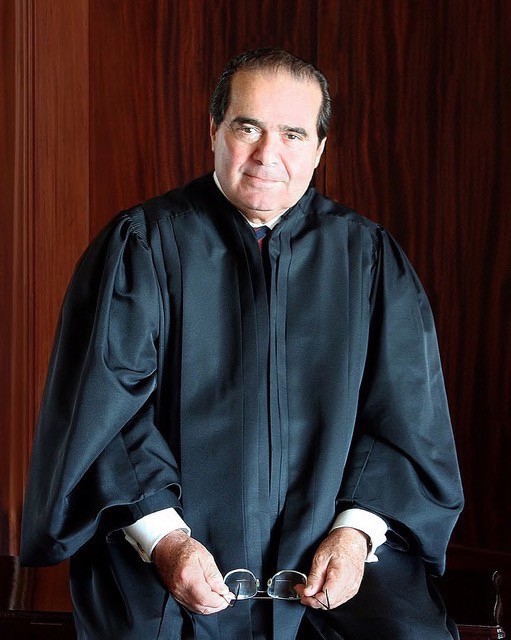 WASHINGTON (AP) — The Latest on the death of Supreme Court Justice Antonin Scalia (all times EST):

Bernie Sanders is slamming Senate Republicans for refusing to confirm a replacement for Supreme Court Justice Antonin Scalia until a new president is elected.

Sanders spoke just after Hillary Clinton criticized Republicans on Scalia’s replacement during her speech at the dinner.

The Republican leader of the Senate, Mitch McConnell, says the American people should have a voice in the selection of the next justice and that the current vacancy should not be filled until there is a new president.

Most of the Republicans at a candidate debate Saturday night in South Carolina also say Obama should let the next president make the choice.

The White House says President Barack Obama has offered his condolences to a son of Justice Antonin Scalia.

White House spokesman Eric Schultz says Obama spoke with the younger Scalia on Saturday evening to offer sympathies on behalf of the Obama family and the country.

Scalia while on a weekend trip to Texas. He was 79.

A Catholic priest administered last rites over the body of Justice Antonin Scalia after he died on a West Texas ranch.

Elizabeth O’Hara is a spokeswoman for the El Paso Catholic Diocese. She says Rev. Mike Alcuino was summoned from 30 miles away in Presidio to perform the traditional rites on Saturday afternoon.

Scalia was a staunch Catholic and a defender of religious freedom on the nation’s high court.

The Cibolo Creek Ranch where he died has long been a secluded retreat for celebrities from business leaders to rock stars and famous beauties.

The resort sits in the middle of the Chihuahua Desert, 15 miles from Mexico, at the foot of the jagged Chinati Mountains and 150 miles southeast of El Paso. The nearest town is Shafter, Texas, population 11.

Speaking at a Democratic dinner in Denver, Clinton says it’s outrageous that Republicans in the Senate and running for president have already pledged to block any nominee by Obama.

The Republican leader of the Senate, Mitch McConnell, says the American people should have a voice in the selection of the next justice and the current vacancy should not be filled until there is a new president.

Most of the Republicans at a candidate debate Saturday night in South Carolina also say Obama should let the next president make the choice.

The death of Justice Antonin Scalia was the first topic of the Republican debate in South Carolina. After a moment of silence in tribute to Scalia, the Republican candidates argued over whether President Barack Obama should nominate a successor or leave that to the next president.

Ted Cruz is assuring voters that he is the best candidate to pick a successor to Scalia.

Jeb Bush is deviating from some of his rivals, saying that he wants “a strong executive” who is willing to make court nominations. But Bush says he doubts Obama will offer a “consensus” nominee the Senate would accept.

President Barack Obama says he plans to fulfill his constitutional responsibility and nominate a successor to fill the vacancy created by the death of Justice Antonin Scalia.

In a direct rebuttal to Senate Republicans, Obama says there is plenty of time for the Senate to confirm his choice. Some Republicans, including Majority Leader Mitch McConnell, say the decision should rest with the next president in January 2017.

Obama pointedly calls the decision “bigger than any one party.” He says it is about democracy.

Obama is praising the late justice as a brilliant legal mind who influenced generation of lawyers and students.

Democratic presidential candidate Hillary Clinton is praising Justice Antonin Scalia as a “dedicated public servant,” even as she notes she does not share his conservative views.

Scalia was found dead Saturday at a private home in Texas.

Clinton says Republicans calling for the seat to remain vacant until the next president enters office “dishonor our Constitution.”

Clinton is in the midst of a weekend campaign swing through Nevada.

The leader of the Senate, Republican Mitch McConnell, says the nomination should fall to the next president. The Republican-led Senate would confirm any nominee by Obama.

Democrats immediately raised objections. The Senate’s top Democrat, Harry Reid, says it would be “unprecedented in recent history” for the Supreme Court to go a year with a vacancy and urged Obama to send the Senate a nominee right away.

Leaders in both parties are likely to use the vacancy to implore voters to nominate presidential candidates with the best chance of winning in November’s general election.

Senate Majority Leader Mitch McConnell says the Supreme Court vacancy created by the unexpected death of Justice Antonin Scalia should not be filled until a new president takes office.

In a statement Saturday, McConnell mourned Scalia, calling him an “unwavering champion of a timeless document that unites each of us as Americans” — the Constitution. He offered condolences to the Scalia family.

The leader of the Republican-controlled Senate sent a clear message to President Barack Obama that if he nominates a successor to Scalia, that individual is unlikely to win Senate confirmation.

McConnell says the American people should have a voice in the selection of the next justice, and the vacancy should not be filled until after a new president takes office in January 2017.

Antonin Scalia, the influential conservative and most provocative member of the Supreme Court, has died. He was 79.

The U.S. Marshals Service in Washington confirmed Scalia’s death at a private residence in the Big Bend area of West Texas.

The service’s spokeswoman, Donna Sellers, says Scalia had retired for the evening and was found dead Saturday morning when he did not appear for breakfast.