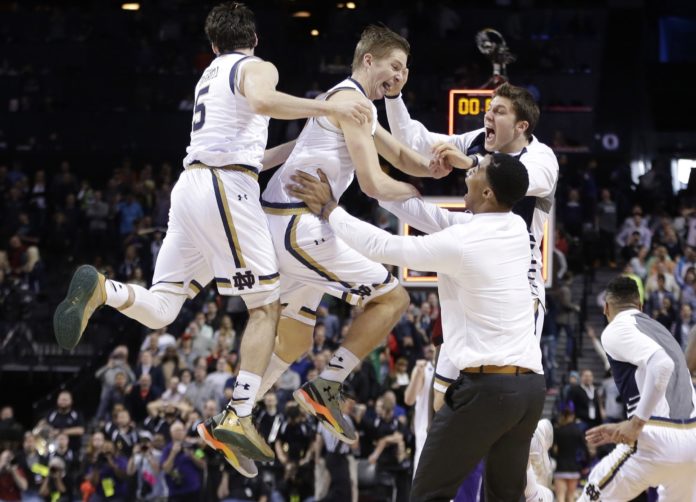 After 52 NCAA Tournament games, the Sweet 16 is set.

Oregon was the last team to punch its ticket as the second round of the NCAA Tournament ended with a flurry of frantic finishes. Now it’s on to the regional semifinals that start on Thursday.

The round of 16 will include the following matchups by region:

Ok, now everyone can take a minute to catch their breath.

Within minutes, Texas A&M advanced to the Sweet 16 with a double-overtime victory against Northern Iowa and Wisconsin joined the Aggies with a buzzer-beater against Xavier.

Now the final game of the second round is at halftime with Oregon leading 32-27 over No. 8 seed Saint Joseph’s.

Dillon Brooks and Elgin Cook both scored 10 points in the first half for Oregon and the Ducks’ defense held St. Joe’s star DeAndre’ Bembry to just four points.

But Oregon’s outside shooting struggled and was just 2 of 13 from 3-point range.

Bronson Koenig hit two 3-pointers in the closing seconds, the last of them as the buzzer sounded, and seventh-seeded Wisconsin edged second-seeded Xavier 66-63 on Sunday night in the second round of the NCAA Tournament.

The talented sharpshooter who failed to hit from beyond the arc in a first-round win over Pittsburgh connected from well beyond the 3-point line to tie it at 63 with 11.7 seconds remaining.

Edmond Sumner brought the ball up court for Xavier (28-6), and then drove to the basket, running over the Badgers’ Zak Showalter and getting called for an offensive foul with 4.3 seconds to go.

Northern Iowa was in control. Texas A&M fans were leaving. Then Northern Iowa collapsed and the Aggies went on a furious rally.

The No. 3 seed Aggies outscored Northern Iowa 14-2 in the last 33 seconds of regulation to force overtime, then held on in double overtime for a 92-88 victory to move on to the Sweet 16.

Northern Iowa, seeded 11th, had upset Texas, but had four turnovers in the final 29 seconds.

Paul Jesperson, who made the halfcourt game winner against the Longhorns, launched another halfcourt heave at the end of regulation for the win against Texas A&M but missed.

The NCAA Tournament is road trip for everyone, though hardly anyone has had to pack like 13th-seeded Hawaii.

And if the Warriors can pull a second straight upset and knock off Maryland, it will add one more week to an already lengthy trek.

Hawaii has not been on its campus since March 1 when the Warriors left Honolulu to close out the Big West regular season schedule with games at UC Davis and Long Beach State. They remained in Southern California for the Big West Tournament in Anaheim and flew directly to Spokane, Washington, for their NCAA opener against Cal.

But a win over fifth-seeded Maryland would add a few more miles to the Warriors road trip. Hawaii would travel almost immediately to Louisville, Kentucky for the Sweet 16 — 1,720 air miles from Spokane and 4,370 air miles from Honolulu.

The Atlantic Coast Conference is on a roll in the NCAA Tournament.

With Notre Dame’s exciting victory over Stephen F. Austin, the ACC has five teams headed to the Sweet 16, and possibly six if Syracuse can get past Middle Tennessee.

Here’s a look at conferences that have accounted for five of the Sweet 16 since the NCAA tournament field expanded to 64 teams in 1985 (x-reached Final Four):

After scoring 20 points and grabbing eight rebounds in VCU’s opening-round victory over Oregon State, junior Mo Alie-Cox was scoreless in the first half against Oklahoma.

The 6-foot-7, 250-pound Alie-Cox also had three blocks and was 7 of 8 from the field against the Beavers, using his bulk to make up for his relative lack of height.

However, against the Sooners physical inside combination of Ryan Spangler and Khadeem Lattin, Alie-Cox struggled to find free space in the first half as Oklahoma outrebounded the Rams 25-13.

The junior played only eight minutes in the first half, with 6-10 sophomore Michael Gilmore taking his place, and he also failed to grab a rebound.

The Lumberjacks, who upset West Virginia, were looking to pull off another stunner in the NCAA Tournament. But Pflueger’s offensive board ended their run.

Oklahoma backup center Akolda Manyang won’t be available for the second-round game against VCU because of a death in the family.

A team spokesman says Manyang flew back to Minnesota on Sunday morning.

Thomas Walkup of Stephen F. Austin was called for his third foul with 17:53 left in the second half and Notre Dame up 46-43.

Walkup stayed in the game and hit a jumper moments later to tie it at 47.

Credit to Stephen F. Austin for being able to play two very different styles and have success in their first two NCAA Tournament games.

Thomas Walkup has eight points for the Lumberjacks.

Notre Dame’s V.J. Beachem, who was 7 for 7 against Michigan in the first round, made his first two against Stephen F. Austin before finally missing. But he converted a four-point play to give Notre Dame a 34-32 lead with 2:40 left in the first half.

The Lumberjacks are playing far more efficiently on the offensive end, too, and have an 18-16 lead with 10:54 left. Thomas Walkup has four points, two rebounds and two assists for SFA.

Villanova is cruising toward its first Sweet 16 appearance since 2009.

Jay Wright is starting to clear the bench at the Barclays Center in Brooklyn. The Wildcats are up 20 on Iowa with about 2 minutes to go in the second half.

Next up will be Miami on Thursday in Louisville, Kentucky.

How do you erase the memories of some awful recent second-round flops? Play the first half that Villanova just did against Iowa.

The Wildcats tore apart the Hawkeyes and lead 54-29 at the break. Villanova shot 60 percent from the floor, scored 12 points off eight turnovers and outrebounded Iowa 19-12.

The only way it could have been worse for Iowa is if the Stanford band played at halftime.

The bars and pubs around the Barclays Center in Brooklyn are loaded with Villanova fans, getting revved up for the Wildcats’ second-round game against Iowa.

Coach Jay Wright’s team has stumbled at this point the last two seasons as a high seed.

If the Wildcats do advance, they won’t get the home games they hoped for in Philadelphia next week. Villanova was placed in the South region instead of the East region. So the winner of Wildcats-Hawkeyes is headed to Louisville.

Women’s NCAA Tournament officials in Syracuse say the same scoring crew that mistakenly provided Florida an extra point in the Gators’ 61-59 loss to Albany on Friday will be working the second-round game between 12th-seeded Albany and fourth-seeded Syracuse on Sunday.

The Gators were awarded an extra point when the official scorer credited January Miller with making a free throw to complete a three-point play in the second quarter. The score stood with Florida having 59 points, even though the box score showed the Gators with 58 because the official scorer was unable to resolve the discrepancy before the game ended.