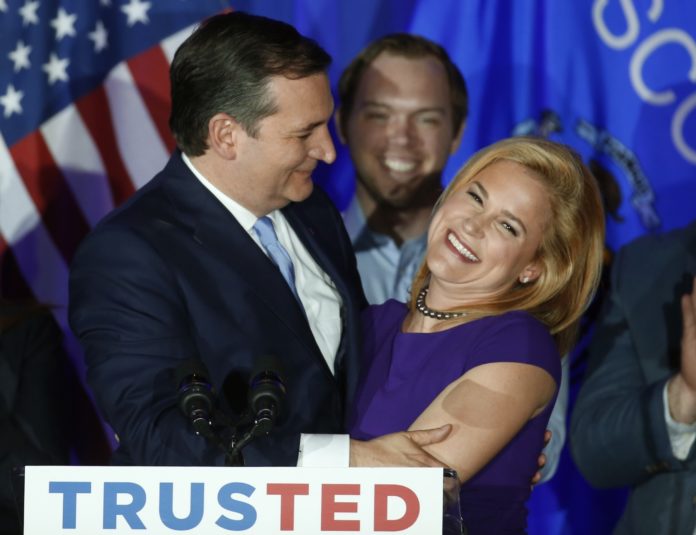 WASHINGTON (AP) — The Latest on campaign 2016 as voters in Wisconsin head to the polls for the state’s presidential primary (all times Eastern Daylight Time):

Democratic presidential candidate Bernie Sanders says his string of recent victories is cutting into Hillary Clinton’s lead, giving him a real shot at the nomination.

Sanders is campaigning in Wyoming just after his victory in the Wisconsin primary.

He says, “We have now won seven out of eight of the last caucuses and we have won almost all of them with overwhelming landslide numbers.”

Despite those victories, Sanders still trails Clinton in the delegates who determine the party nomination.

Sanders believes he can narrow that gap with a victory in New York on April 19 and some of the five northeastern states that cast ballots a week later. He’s expected to win the Wyoming caucuses Saturday.

He’s casting himself as the stronger general-election candidate against GOP front-runner Donald Trump.

Hillary Clinton is congratulating rival Bernie Sanders on his win in Wisconsin.

“Congrats to @BernieSanders,” she wrote on Twitter. “To all the voters and volunteers who poured your hearts into this campaign: Forward!”

Sanders is campaigning in Wyoming, which holds its caucuses Saturday. Clinton spent the evening fundraising in the Bronx.

Texas Sen. Ted Cruz is looking ahead to November, saying he wants to deliver Wisconsin for Republicans for the first time in 32 years.

Cruz won the state Tuesday and talked to supporters in Milwaukee.

Wisconsin has not voted for a Republican for president since Ronald Reagan in 1984. But Cruz says he will be the first Republican since then to win Wisconsin and paint the Badger State “bright Republican red.”

He is ending his victory speech with a warning to Democratic front-runner Hillary Clinton. Cruz says: “Hillary, get ready. Here we come.”

Texas Sen. Ted Cruz says his victory in Wisconsin is uniting the Republican Party and gives him a path forward to winning the nomination, either outright or at the convention this summer.

Cruz says: “Tonight, Wisconsin has lit a candle guiding the way forward. Tonight, we have hope for the future.”

Cruz is citing a string of recent victories, and the backing of five former GOP presidential candidates, as evidence that Republicans are getting behind his candidacy. He says his campaign raised $2 million on Tuesday alone.

Cruz says, “I am more and more convinced our campaign is going to earn the 1,237 delegates need to win.”

Hillary Clinton wasn’t greeting voters at a rally, town hall or diner as votes rolled in from Wisconsin. Instead, she was spending her evening with top donors in New York City.

She raised at least $60,000 Tuesday night at a fundraiser hosted by Jack Benheim, the owner of a company that manufactures veterinary health products and nutritional supplements. Benheim, a former vice president of the American Israel Public Affairs Committee, has deep ties to New York’s orthodox Jewish community.

The event underscores how costly the primary race has become for Clinton. Though she holds a significant delegate lead, Bernie Sanders has vowed to take his campaign to the party convention in July. That forces Clinton, who’s more reliant on traditional fundraising than Sanders, to criss-cross the country raising funds.

Bernie Sanders’ win in Wisconsin will net him a handful of additional delegates, but he still lags Hillary Clinton by a big number.

With 86 delegates at stake, Sanders will pick up at least 44. Clinton will gain at least 28.

He still must win 67 percent of the remaining delegates and uncommitted superdelegates in order to win the Democratic presidential nomination.

Based on primaries and caucuses alone, Clinton now has 1,271 delegates to Sanders’ 1,024.

When including superdelegates, or party officials who can back any candidate, Clinton has a wider lead — 1,740 to 1,055.

Ted Cruz is collecting most of the delegates at stake in the Wisconsin primary, and he has a chance to win even more.

Cruz is winning at least 24 delegates, with 18 left to be allocated. By winning Wisconsin, Cruz is making it more likely the race for the Republican nomination will go all the way to a contested convention this summer.

Donald Trump still has a narrow path to claim the nomination by the end of the primaries on June 7. But by losing Wisconsin, Trump’s path gets even narrower.

The victory in a large state gives a powerful political boost to Sanders backers. But the results barely dent Clinton’s significant delegate lead for the race nomination.

Because Democrats award delegates proportionally, both candidates will add to their tallies. Clinton has the edge both in pledged delegates and the party insiders known as superdelegates.

Sanders is favored to win the next primary caucuses in Wyoming on Saturday.

Both candidates are turning their attention to the April 19 contest in New York. A loss there would be a major political blow for Clinton, who represented the state for eight years in the Senate.

Ted Cruz has won the Republican presidential primary in Wisconsin. The win gives critics of Donald Trump hope that they can stop the GOP front-runner’s rise to the party nomination. They are trying to deny him the majority of delegates and force a contested convention in July.

The Texas senator is casting his victory as a sign that he is the only candidate who can stop Trump. He’s calling on Republicans to unify behind him and pushing Ohio Gov. John Kasich to drop out of the race.

Trump is the favorite in the next primary on April 19 in his home state of New York. He remains the only Republican who can clinch enough delegates to capture the nomination before the party convention.

On the GOP side, Ted Cruz has the edge over front-runner Donald Trump.

Both Cruz and Sanders are hoping for victories that will give them a wave of fresh momentum in their efforts to capture the White House.

Wisconsin is projected to have its highest turnout in a presidential primary since 1980, but that hasn’t translated into problems at the polls.

The state elections board projects turnout at 40 percent of eligible voters.

Board spokesman Mike Haas says clerks around the state had reported a busy pace but manageable lines throughout the day. The state is holding just its second election since voters were required to show photo identification, and Haas says his office hadn’t heard of any major issues.

Neil Albrecht, executive director of Milwaukee’s election commission, said wait times in the state’s largest city didn’t exceed 30 minutes even during peak voting. Albrecht estimated the city would have four to five times the same-day voter registration it had for the primary four years ago.

Bernie Sanders offered few details on how he would break up big financial institutions during a recent interview with the New York Daily News.

The Vermont senator was pressed on how he would carry out his campaign pledge.

Sanders said some banks are too big and could be broken up either by “having legislation passed, or giving the authority to the secretary of treasury to determine, under Dodd-Frank, that these banks are a danger to the economy over the problem of too-big-to-fail.”

But Sanders did not elaborate on how this would work. When asked how breaking up banks would affect jobs and assets at financial institutions, Sanders said it “is their decision as to what they want to do and how they want to reconfigure themselves. That’s not my decision.”

About a quarter say they’re excited about Trump, while less than 15 percent say that of either of his rivals. At the same time, nearly 4 in 10 say they’re scared about what Trump would do as president, while only about 1 in 10 say that about either Cruz or Kasich, according to early results of exit polls conducted for The Associated Press and television networks by Edison Research.

Democratic voters in Wisconsin are divided on the effect of trade on unemployment, an issue that Vermont Sen. Bernie Sanders has played up in a flood of television ads over the past few weeks.

About 45 percent of Democratic voters say trade with other countries takes away jobs in this country, while nearly 4 in 10 see trade as beneficial, according to early results of exit polls conducted for The Associated Press and television networks by Edison Research. Only about 10 percent see trade as having no effect on job in the United States.

The polls indicate a mixed response on an issue that Sanders has put at the center of some of his most-aired television ads.

Over the past month, Sanders has poured about $2.4 million into radio and television ads in Wisconsin and one of his top aired ads has tucked in several subtle jabs at former Secretary of State Hillary Clinton’s record on trade, according to data from political advertising tracker Kantar Media.

One Sanders ad touts the senator as standing with American workers, linking jobs losses to the North American Free Trade Agreement, which was signed into law by former President Bill Clinton, and the Trans-Pacific Partnership, which Clinton initially supported but has since said she opposes.