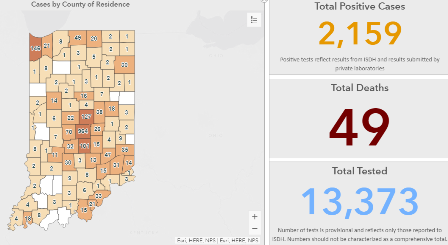 The latest report from the Indiana State Department of health details another large increase in the number of confirmed cases, along with a sizeable increase in fatalities.

Tuesday’s numbers mark the first report with more than 2,000 confirmed cases; officially at 2,159. The number of fatalities grew from 35 on Monday to 49 on Tuesday as well. That included the first confirmed and reported death in Elkhart County. Exact details about the person that died were not included in the ISDH release.

Locally the number of confirmed cases are as follows: