Indiana’s unemployment rate has soared to a record 16.9% percent as the full impact of the coronavirus pandemic comes into focus.

Indiana’s unemployment rate went up fivefold in April to spike from the 10th-lowest jobless rate in the country to the fifth highest. Only three states had a bigger increase. The state lost nearly a half-million jobs — that’s also a record since state-level data began in 1976.

Ball State economist Michael Hicks warns the reopening of businesses this month probably won’t do much to bring those jobs back. He says consumer spending had already begun to plunge even before Governor Holcomb announced what became a six-week stay-at-home order on March 23. He says industries most affected by social distancing requirements, like restaurants, casinos, and hotels, will be slowest to recover.

And Hicks says the jobless rate is understating the real number, because it’s based on a survey conducted around April 12. He says the May number is likely to be more than 20-percent.

Hicks says the actual flood of job losses is slowing down, based on the declining number of new unemployment claims. But until there’s a vaccine or an effective treatment for coronavirus, he says there’s not much the administration can do to bring jobs back. All it can do is try to avoid making matters worse, by helping people keep a roof over their head and food on the table. Holcomb announced this week he’s expanding a ban on new foreclosures and evictions another four weeks, to July 1.

The following information was released by the Indiana Department of Workforce Development:

INDIANAPOLIS (May 22, 2020) – Indiana’s unemployment rate stands at 16.9 percent for April and is higher than the national rate of 14.7 percent. The monthly unemployment rate is a U.S. Bureau of Labor Statistics (BLS) indicator that reflects the number of unemployed people seeking employment within the prior four weeks as a percentage of the labor force.

Learn more about how unemployment rates are calculated here: http://www.hoosierdata.in.gov/infographics/employment-status.asp. 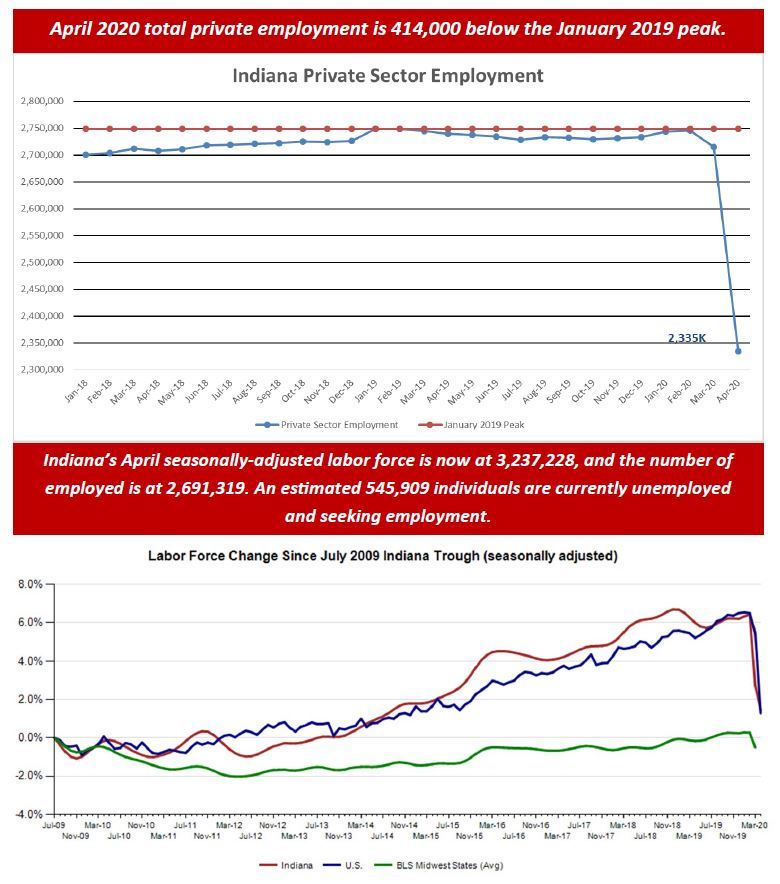