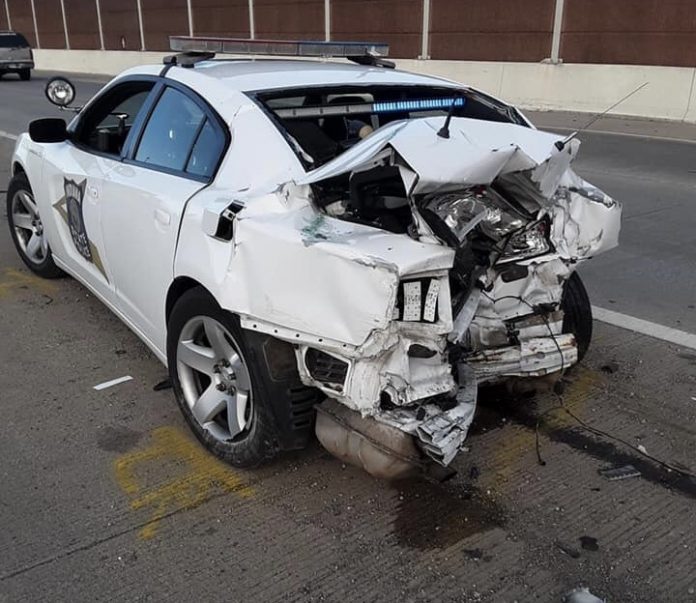 An Indiana State Police Trooper is recovering after he was struck by a vehicle while he was sitting in his squad car.

The collision happened around 8:15 a.m. on Friday, Dec. 25, when troopers from the Lowell Post were investigating a crash on I-80/94 WB on the overpass at Indianapolis Blvd.

As the troopers were investigating, Trooper Davonne Barlow, a 9-year veteran, parked his fully marked police car on the left shoulder against the concrete median barrier.  Trooper Barlow was acting as a “secondary unit”.  As he was parked and sitting in his car, with his seatbelt fastened, his car was rear-ended by an SUV.

The preliminary investigation shows that a black 2001 BMW swerved as it approached the scene.

The driver, Willie J. Whithead, 30, from Green Bay, Wisconsin, lost control of his vehicle and struck the 2013 Dodge Charger.

The force of this impact caused the police car to strike the median wall, then the Charger crossed all lanes of I-80/94 coming to a rest on the right shoulder.

Both drivers were transported to Munster Community Hospital for treatment of non-life-threatening injuries.

The interstate was closed for 2 hours for crash reconstruction/investigation.

This is an-going investigation, any charges will be determined by the Lake County Prosecutor pending the results of toxicology tests.

Trooper Barlow has since been treated and released from the hospital and is recovering at home with his family.