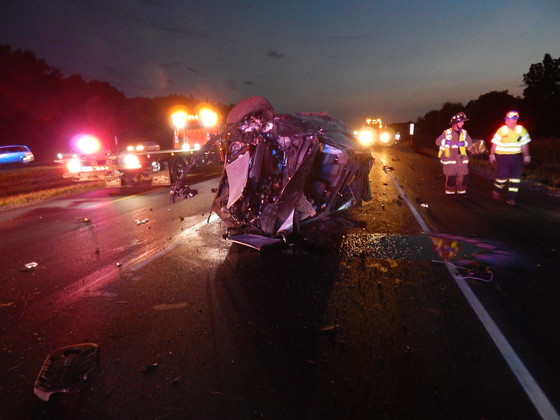 Distracted driving and drugs may be factors into one of two crashes on the Indiana Toll Road in LaGrange County.

Indiana State Police troopers were called around 9:20 p.m. on Friday, July 2, to a semi vs car crash on the I-80/90 Indiana Toll Road westbound near the 112 mile marker.

Arriving on scene, troopers learned that there were actually two separate single vehicle crashes, not a collision between a semi and passenger car.

The preliminary investigation revealed that a 2017 Kia passenger car had been traveling eastbound on the toll road when, for an unknown reason, it ran off the roadway through center grass median, rolling multiple times in the westbound lanes with oncoming traffic. The Kia came to a final rest on its side and did not strike any other vehicles.

A semi-tractor/trailer traveling in the westbound lanes was able to take evasive action to avoid collision with the Kia passenger car, however the semi then ran off the roadway and crashed in the north ditch. The semi driver was not injured in his crash.

The Kia driver, a 36-year-old man from Berwyn, Illinois, was found to be suffering with multiple serious trauma injuries to his head and arm.  Prior to the troopers’ arrival, several motorists were assisting the injured driver.  A trooper applied a tourniquet to the man’s arm to control the heavy bleeding and then requested a Parkview Samaritan helicopter to the scene.  Prior to EMS personnel arriving on scene, the trooper  had to apply a second tourniquet to further control the bleeding.  The man was flown from the crash site to a Fort Wayne hospital and was last listed in stable condition.

The preliminary investigation found witness information that alleges the man was observed on his cellphone prior to the crash, suggesting that distracted driving may have been a primary cause, or at least a contributing cause.  Drug impairment is also suspected, a factor that remains under investigation.

The man was wearing his seatbelt, however the airbags equipped in the KIA were not in working order, apparently because they had deployed in an earlier crash.  The man’s dog was possibly ejected from the car during the crash, and was later found in good condition in a side ditch.  LaGrange Animal Control was notified to care for the dog.

The westbound lanes of traffic had to be completely shut down for roughly two hours until the vehicles and all debris could be cleared from the roadway.

The completed investigation will be turned over to the LaGrange County Prosecutor for review and determination of any criminal charges that may arise from this crash.