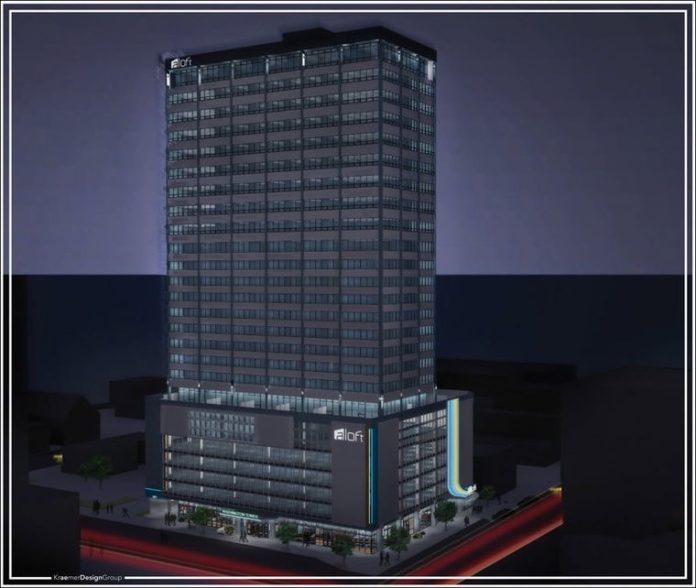 The tallest building in downtown South Bend is getting a makeover.

Formally known as the Chase Tower, the building at 213 Washington Street will be remodeled into Aloft South Bend, a hotel that also features luxury residential apartments.

The remodeling, which will cost $30 million, will begin with the parking garage, the South Bend Tribune reported. Construction there could begin as soon as this week and include demolition inside the garage and improvements to its exterior.

Major construction will likely begin in 2016. Architect Robert Kraemer of Kraemer Design Group told the South Bend Common Council on Monday night, Sept. 28, that the plans include stripping the building down to bare bones and starting from almost scratch.

The roof will be replaced, as will the windows, elevators and mechanical and plumbing systems, the Tribune reported. The building will be wrapped in a new facade and the parking garage will have a decorative metal screening. Illumination will also be added to the building’s exterior.

When construction is complete, the building will house 183 hotel rooms, 83 apartments, expanded ballrooms, a pool, and ground floor restaurant and retail space, the Tribune reported.

The construction and the opening of Aloft South Bend will also create more than 80 full-time permanent jobs and up to 300 temporary construction jobs. Read more about the plans in the full story from the South Bend Tribune.