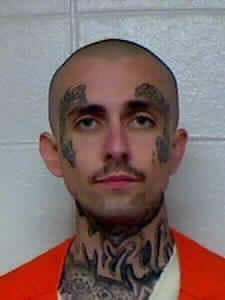 PENDLETON, Ind. (AP) — Authorities have been searching for an inmate who escaped from a minimum-security dormitory at a central Indiana prison.

State prison officials say 28-year-old Charles Adams was determined to be missing Sunday night from the dormitory that’s outside the maximum-security area of the Pendleton Correctional Facility.

Police agencies are searching the area around the prison about 20 miles northeast of Indianapolis.

State records show Adams was serving a nearly 2-year sentence for theft and receiving stolen property from an October conviction in northeastern Indiana’s Steuben County. Adams is described as a white male, 5 feet, 11 inches tall, about 150 pounds with several tattoos on his face and neck.