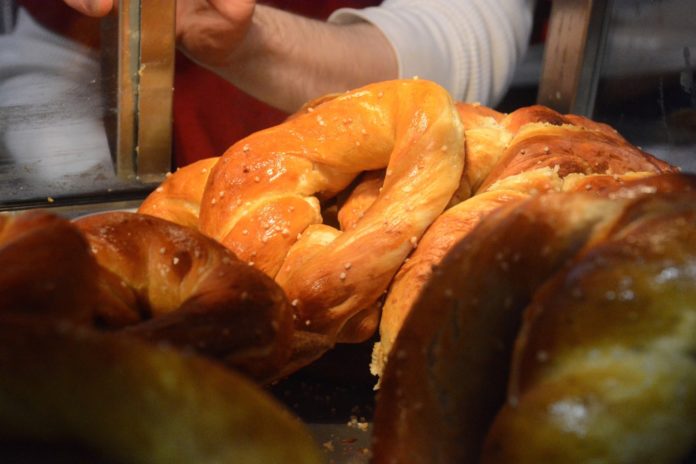 GOSHEN — Building a national pretzel brand from steadfast Amish-roots has been the key to growth for pretzel bakery Ben’s Soft Pretzels, the fastest growing soft pretzel franchise in the United States.

Opening 27 new locations in the last year with more than 20 currently in development for 2016, the Indiana-based pretzel concept is stepping up as a strong contender in the $124 billion snack industry.

To add to the simplicity of owning and operating a Ben’s Soft Pretzels franchise, the brand recently launched a partnership with Gordon Food Service to create a national distribution system. As of mid-January, all of the ingredients that a Ben’s Soft Pretzels franchisee would need to run the bakery now comes from the food service distributor, creating a streamlined and cost-effective system. Executives also changed the overall design of the bakery by adding brighter and bolder colors and redesigned its internal training program.

Charging forward full throttle, Ben’s Soft Pretzels is targeting markets across the United States such as Cincinnati, Detroit, Louisville, Indianapolis, Chicago and Northern Florida. With the goal to create high-traffic real estate opportunities for prospective franchisees, executives signed master lease agreements with Walmart and Meijer. In 2016 alone, Ben’s Soft Pretzels will open in eight Meijer superstores, on track to be within every newly constructed location.

Ben’s Soft Pretzels is a quick-serve franchise opportunity that offers a simple business model with prime real estate locations. With investment levels ranging from $124,000-$308,000, executives are looking for entrepreneurs who can commit to an entire market.

“Our business started with humble beginnings at a farmers market and because of that we’re even more excited to see what we can accomplish by adding qualified franchise partners to the Ben’s Soft Pretzels family,” added Krider.

Nearly eight years ago, the founding trio came together to start a pretzel business during the worst economy when unemployment was at 17 percent and malls were 60 percent unoccupied. Ben and his wife, 3 rd generation Amish bakers, perfected the Amish/Dutch dough recipe that is used to this day in all Ben’s Soft Pretzels. The first Ben’s Soft Pretzels bakery opened in 2008 in Concord Mall in Elkhart, Ind., and the first franchise was awarded in 2013 on the same day they were legally allowed to start selling.

Serving as a driving force of the brand, Ben’s Soft Pretzels partners with Intrepid Fallen Heroes, a nonprofit providing support for the men and women of the Armed Forces and their families. Last year, Ben’s Soft Pretzels was able to donate $30,000 to the organization and hopes to top that amount this year on National Pretzel Day (April 26) by giving away free pretzels with a minimum donation of $1.