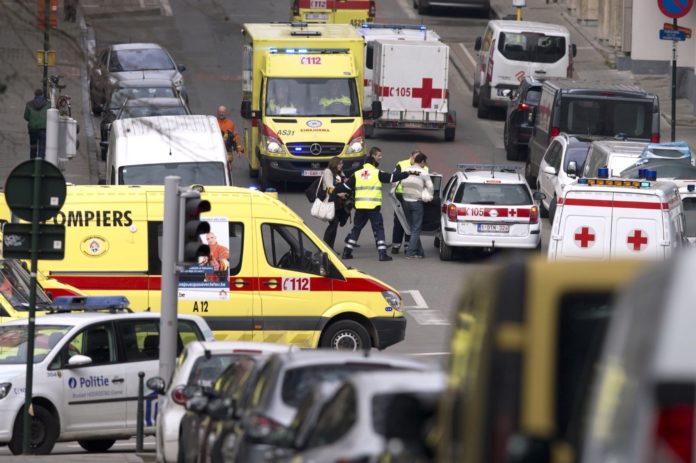 BRUSSELS (AP) — The Latest on the attacks in Brussels and related investigations (all times local):

Paul Van Tigchelt, head of Belgium’s terrorism threat body, told reporters Wednesday that is why the country is keeping the terrorism threat level at its highest level, which means there is a danger of an imminent attack.

He spoke alongside prosecutors who say they are searching for at least one person directly involved in the attack on Brussels airport.

A Belgian prosecutor says a suicide bomber who attacked the Brussels airport left a will on a computer found in a trash can in a Brussels neighborhood.

Investigators raided the Brussels neighborhood of Schaerbeek after the attacks and found a computer in a trash can on the street including a note from El Bakraoui saying he felt increasingly unsafe and feared landing in prison.

The prosecutor also said one person detained in one of the raids remains in custody Wednesday and is under questioning.

A Belgian prosecutor has identified two of the attackers who targeted the Brussels airport and subway as brothers Ibrahim and Khalid El Bakraoui but says another unidentified attacker remains at large.

A third attacker also came to the airport with an explosive in a bag, but it exploded later and no one was hurt, the prosecutor said.

He said Khalid El Bakraoui, 27, blew himself up at the Maelbeek subway station. The attacks Tuesday killed at least 31 people and wounded 270, he said.

Brussels airport has announced that it will remain closed to passenger flights for at least another day, right up to the start of the busy Easter weekend.

Airport officials said they would have to cancel some 600 flights each on Wednesday and Thursday. It means that since the attack on the airport Tuesday morning, the flights of some 180,000 passengers will be disrupted.

Brussels airport was hoping to resume cargo flights earlier but there was no immediate word on when.

Belgians are holding a moment of silence to honor at least 34 people killed in unprecedented Islamic extremist attacks on Brussels.

Government offices, schools and residents marked the moment in a mood of anxiety, defiance — and fear that other people involved in the attacks Tuesday on the Brussels airport and a subway station may still be at large.

The country is holding three days of national mourning for the victims. In addition to those killed, over 200 people were wounded in the attacks.

Belgian police, meanwhile, are conducting raids and the country is at its highest terrorism alert level, meaning there’s a risk of an imminent attack.

The Belgian football federation has called off an international soccer friendly match against Portugal next week because of Tuesday’s attacks in Brussels.

The federation said “because of security concerns” the city of Brussels asked for the cancellation and the federation obliged. The game was to have been played next Tuesday at the King Baudouin stadium in Brussels.

The Belgian team, which is one of the favorites to win this summer’s European Championships, had already canceled training for the friendly since the attacks.

French Prime Minister Manuel Valls says the show must go on and big events, be they sports or cultural, must not be put on hold for fear of terror attacks.

He says Wednesday that includes the Euro2016 soccer tournament, a monthlong event being held in France that starts in June.

Valls says “the big popular events are indispensable in showing that we are a free people, on our feet, that we aren’t scared.”

Some commentators had called for the soccer tournament to be postponed due to the threat of terror.

Valls says authorities know these events are faced with a terror threat and will plan accordingly. But he insists that events like the Euro2016 tournament, the Tour de France bicycling race and “other large demonstrations will take place.”

Pope Francis has led thousands of people in silent prayer for the victims of the attacks at Brussels’ airport and in its metro.

At the end of his public audience in St. Peter’s Square Wednesday, Francis expressed his closeness to the “dear Belgian people” and asked the crowd of pilgrims and tourists to join him silently in prayer.

He also appealed to “all persons of good will to unite in unanimous condemnation” of the attacks causing death, horror and sorrow.

Francis is preparing to celebrate Holy Week ceremonies that will draw large crowds, including a Colosseum cross procession and culminating with Easter Mass in the square on Sunday.

The U.S. Embassy in Rome on Wednesday issued a travel alert advising “particular caution during religious holidays” as well as at large events.

The Czech Defense Ministry says soldiers have been deployed as part of stepped-up security measures following the attacks in Brussels.

As of Wednesday morning, the ministry says 550 service members will be patrolling international airports, train stations and other places in the capital and all across the country, working with police officers.

Security was also boosted at Prague’s subway network, at the country’s two nuclear power plants and some foreign embassies.

A lawyer’s assistant says a judicial hearing in Brussels for Paris attacks suspect Salah Abdeslam has been postponed for a day to Thursday, apparently because of heightened security concerns in the Belgian capital.

Bombing attacks Tuesday in the Brussels airport and subway killed 34 people and wounded scores, and the terrorism alert level throughout Belgium has been raised to its maximum level.

Abdeslam, who was arrested Friday in Brussels, was to appear Wednesday before a panel of judges who could extend his detention by another month. French authorities are seeking Abdeslam’s extradition so he can be tried for his alleged role in the Nov. 13 bomb-and-gun attacks that killed 130 in Paris.

An assistant to Sven Mary, Abdeslam’s defense lawyer, told The Associated Press her boss was told the hearing had been rescheduled for Thursday morning. She refused to give her name.

He says: “It is urgent to adopt the European PNR. The European Parliament has waited too long to adopt this text. It must examine and adopt it in April, it’s time.”

Valls is going to Brussels today and says he will express his “full solidarity” with Belgium’s people.

As Brussels woke after its worst violence in decades, joggers ran loops and dog walkers chatted as usual in Brussels’ 18th-century Warandepark across from the country’s parliament. But gardeners on duty said the atmosphere was different, and the mood around town was jittery as sirens frequently wailed.

“It was black day. A very black day,” said Jean-Marie Vrebos, 58, who was cleaning the park’s playground. “We should punish those who commit terrorism. We don’t deserve terror. We should punish them, GRAB them” — he yanked a piece of trash off the ground with a clasper — “and bring them to justice.”

His colleague Kevin Engels, 24, said, “Behaviors have changed. Even our bosses seem stressed. They asked us to empty all the trash cans. We pay close attention to everything. And you can hear the sirens.”

De Maziere also says a soccer friendly match against England will go ahead despite the Brussels attacks. He says authorities “have no indications of a security threat” targeting the match in Berlin on Saturday.

In November, Islamic extremists tried to enter the stadium where Germany was playing France as part of a series of attacks in Paris. Days later, a friendly against the Netherlands days was canceled because of a security warning.

Belgian authorities were searching Wednesday for a top suspect in the country’s deadliest attacks in decades, as the European Union’s capital awoke under guard and with limited public transport after 34 were killed in bombings on the Brussels airport and a subway station.

Police conducted raids into the night and circulated a photo of three men seen in the airport suspected of involvement in Tuesday’s attacks.

Belgian state broadcaster RTBF has identified two of the attackers as brothers Khalid and Brahim Bakraoui. They are believed to have blown themselves up in the attacks.

The third man is at large and has not been identified.

The report Wednesday says the brothers were known to police for past crimes, but nothing relating to terrorism. RTBF says Khalid Bakraoui had rented an apartment which was raided by police last week in an operation that led authorities to top Paris attacks suspect Salah Abdeslam.