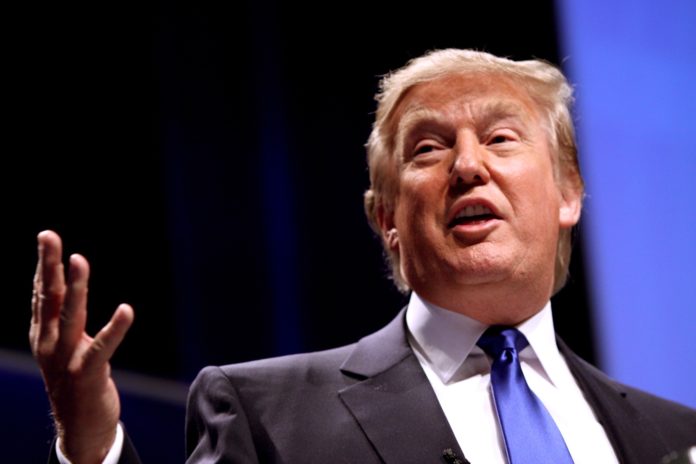 Donald Trump is defending his campaign manager who was charged with misdemeanor battery on Tuesday for an incident with a reporter.

Corey Lewandowski turned himself in to police in Jupiter, Florida. Michelle Fields, a former reporter for Breibart, filed charges that Lewandowski pulled her arm when she tried to ask Trump a question at the Trump National Golf Club on March 8.

Trump tweeted Tuesday afternoon that Lewandowski was “a very decent man” and urged: “Look at tapes-nothing there!”

Surveillance footage taken from the golf club was released by police and appears to show Lewandowski reach toward Fields.

Trump also took to Twitter to suggest that Fields’ account of the incident should be questioned. His campaign also released a statement saying Lewandowski was innocent of all charges.

Cruz spokeswoman Alice Stewart said Tuesday that “personal attacks, verbal attacks, and now physical attacks have no place in politics or anywhere else in our society.”

Police in Florida have charged Trump campaign manager Corey Lewandowski with battery in connection with a recent event involving a reporter.

Kasich’s chief strategist John Weaver said Lewandowski would’ve been fired “long ago” had he worked for Kasich. He added that campaigns reflect the values of a candidate.

The Republican front-runner’s campaign issued a statement Tuesday after Jupiter, Florida, police charged Lewandowski with battery for an incident involving a reporter earlier in the month.

A video surveillance tape obtained by The Associated Press appears to show Lewandowski grabbing Michelle Fields’ arm as she tried to ask Trump a question at a March 8 event.

The statement said Lewandowski “will enter a plea of not guilty and looks forward to his day in court. He is completely confident that he will be exonerated.”

Lewandowski has retained an attorney in West Palm Beach.

Florida police have charged Donald Trump’s campaign manager Corey Lewandowski with simple assault in connection with an incident earlier in the month involving a reporter.

Police in Jupiter, Florida issued Lewandowski a notice Tuesday to appear before a judge on May 4 for the misdemeanor charge. A surveillance video released by the police appears to show Lewandowski grabbing a reporter for Breitbart News as she tried to ask Trump a question during a March 8 campaign event.

The police report states: “Lewandowski grabbed (Michelle) Fields’ left arm with his right hand causing her to turn and step back.” Fields showed police her left forearm which “appeared to show a grabbing-type injury,” according to the investigating officer.