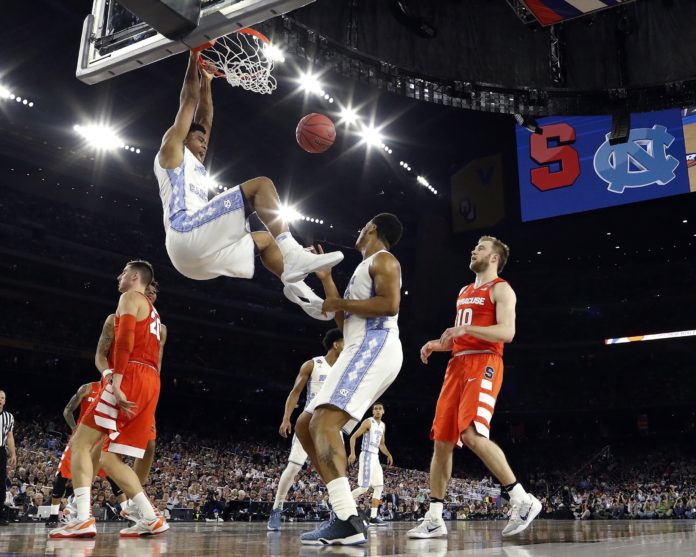 HOUSTON (AP) — Check your brackets — anybody have Villanova playing North Carolina in Monday night’s NCAA men’s basketball final? If so, you’re in luck.

In the most lopsided Final Four game ever, Villanova shot 71.4 percent and mauled Oklahoma 95-51 in the first national semifinal at the men’s Final Four. Josh Hart scored 23 points on 10 of 12 shooting and grabbed eight rebounds with for the second-seeded Wildcats.

Kris Jenkins added 18 for Villanova, which broke it open with a 21-4 run early. The Wildcats also had a 15-0 run in the second half.

Villanova coach Jay Wright said his team just had “one of those nights” when everything clicked. ‘Nova made it particularly tough on star Sooners guard Buddy Hield (HEELD). He was held to nine points on 5-of-20 shooting. The Sooners shot just 31.7 percent.

It’s ‘Nova’s third appearance in an NCAA title game — and first since the Wildcats upset Georgetown to win the 1985 championship.

HOUSTON (AP) — The second semifinal was hardly a nail-biter either. North Carolina, the lone remaining No. 1 seed, beat Syracuse for the third time this season, 83-66. If the Tar Heels beat Villanova Monday night, they will earn their sixth national title.

Brice Johnson and Justin Jackson each had 16 for North Carolina, which led by double-digits most of the game against 10th seed Syracuse. Johnson also pulled down nine rebounds. Marcus Paige added 13 for the Tar Heels and sparked North Carolina in the second half with three 3-point shots.

North Carolina had a huge edge inside and finished with 16 second-chance points on 16 offensive boards.

The Tar Heels have won each of their NCAA tournament games by at least 14 points.

Coach Roy Williams will be looking for his third national championship as coach of the Tar Heels.