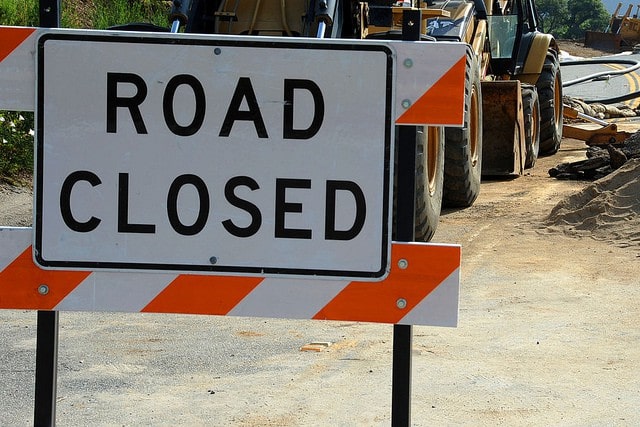 (NEW FOR MON) Another phase of Smart Streets construction begins as Michigan Street is closed on the south side of town, between Barbie Street and Sherwood Street for construction of a roundabout at Michigan and Chippewa. Main Street will become a two-way street and serve as a detour during construction. (ends in August)

Smart Streets construction has Michigan Street closed from LaSalle to Riverside. The intersections of Michigan and Bartlett and Michigan and Marion are closed, as well. You can detour using Sample and Eddy, LaSalle to Niles, or Portage and Angela.(ends 9/2016)

(NEW FOR MON) Washington Street is closed from Main to Lafayette due to dry wall material being placed by a crane into the Chase Tower upper floors. (ends 6/8)

(NEW FOR MON) Main Street is restricted from Jefferson to south-of-Wayne at the alley. (ends 6/8)

Watch for lane closures on Main Street, from Wayne to Monroe AND from Wayne to Western. On Wayne and Western, from Main to Michigan. And on Lafayette, from Colfax to Washington.

Preliminary work for the State Road 23 resurfacing project is underway between Edison Road in South Bend and Gumwood & Main in Mishawaka. (TFN)

The Olive-Sample bridge construction project is underway. Sample Street has lane restrictions… Also Olive Street is closed at Ford Street on north… and south of Sample. Portions of Olive between the SB Water Works drive to Tucker will have lane restrictions. (ends Sep/Oct 2016)

The fifth phase of the City of South Bend’s sewer separation project is underway with road closures taking place along Northside Boulevard and Frances Street, south of Wayne Street. (ends in Nov. 2016)

(NEW) Work has resumed on the Indiana Toll Road with new construction zones in eastern LaPorte County and western St. Joe County, specifically between mile markers 48 to 54 and miles markers 61 to 69 in the east and westbound lanes. Expect delays of up to 30 minutes during peak travel times.

(NEW) Repaving is underway U.S. 131 from the Michigan state line to just north of the Indiana Toll Road, where the roadway becomes S.R. 13. (ends 6/16)

Watch for lane restrictions on U.S. 30 between State Road 15 and State Road 19 in Kosciusko County. (ends in August)

(NEW) Construction is now underway on a roundabout at Five Points Road and U.S. 12 in Cass County, between Edwardsburg and Union. Drivers who travel through the area should detour along Cassopolis Road, Mason Street and Calvin Center Road (ends 9/30)